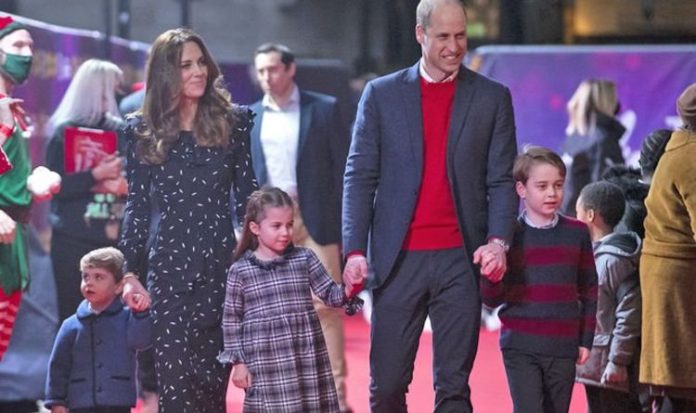 Prince George, seven, Princess Charlotte, five, and Prince Louis delighted royal fans on Friday by stepping out for a festive engagement with their parents Prince William and Kate, Duchess of Cambridge. The young royals looked adorable as they arrived on the red carpet at the London Palladium on Friday afternoon.

The Cambridge clan were there to see a special pantomime for key workers and their children.

The National Lottery’s Pantoland at The Palladium was put on especially to thank frontline workers for their extraordinary efforts during the pandemic.

Daily Express royal correspondent Richard Palmer shared a clip of the royals arriving at the theatre on Twitter.

The tweet read:  “The Duke and Duchess of Cambridge took their children to a special pantomime for key workers at the London Palladium this afternoon.”

The London Palladium show was held in front of key workers and comes just days after Kate and William’s whistlestop tour around the country to meet UK heroes.

The Duke and Duchess traveled 1,250 miles in total hearing stories in the ongoing battle against coronavirus.

William added: “We are here tonight for a very special performance. Special, because of you – the key workers here in the audience.

“You include community workers, volunteers, teachers, NHS staff, representatives from the emergency services and military, researchers working on the vaccine, people helping the homeless, those manning vital call centres, and staff from a wide range of frontline charities – to name but a few.

“You have given your absolute all this year, and made remarkable sacrifices.”

The prince made his way to the royal box where Kate and the children were already seated.

Guests could see Princess Charlotte hold her head in her hand while Louis say on Kate’s lap.

Kate was wearing a dress by Alessandra Rich while William wore a festive red pullover.