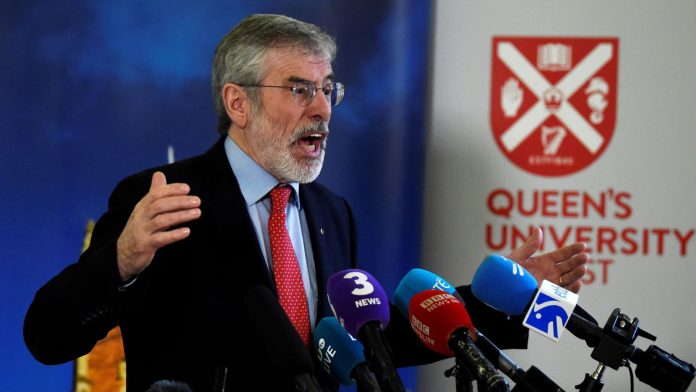 Sinn Fein’s former leader, Gerry Adams, is writing a negotiators cook book, which will reveals secrets of the peace process.

Mr Adams, the former party president, said the book would be based on his experiences during the peace process, which eventually led to the Good Friday agreement in 1998.

It will also include recipes which kept the Irish negotiating team going and will be available before Christmas.

He tweeted: “Not 2 Long 2 Christmas. A Wee Taste Of A Great Stocking Filler From Ted & Pádraic agus Mise.”

The Irish Times said the book will be called The Negotiators Cook Book.

Mr Adams told the West Belfast Festival: “The British never fed us. They never had any food.

“But as intrepid republicans and being blessed by one or two great cooks these are the recipes that sustained the Irish negotiating team.

“It contains some of the best-kept secrets of the Irish peace process.”

The book will be his 17th published work, with his former books taking a more historical or autobiographical focus.

Mr Adams has been a key figure in Sinn Fein since 1978 when he became the party’s vice president. Margaret Thatcher imposed a ban on his voice in broadcasts in 1988, out of fear of giving “terrorists the oxygen of publicity”.

Mr Adams only stepped down as party leader in February 2018, when Mary Lou McDonald was elected as his successor.