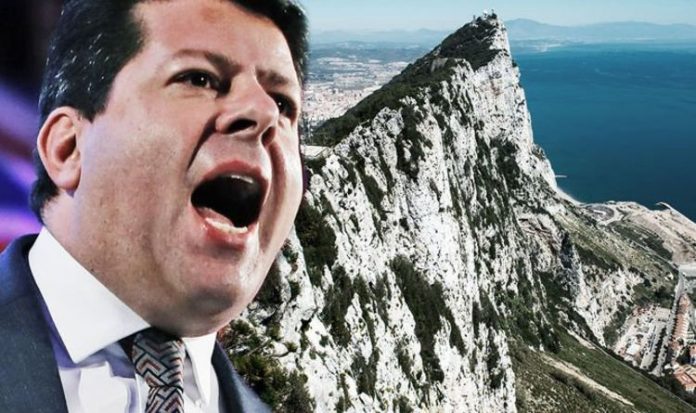 John Bromfield was one of only 823 Gibraltarians who voted for Brexit during the 2016 EU referendum.

Despite all the doom-mongering and fear about Spain shutting down its “frontier” with the British overseas territory, Mr Bromfield claims there would only be one loser.

Despite all the doom-mongering and fear about Spain shutting down its “frontier” with the British overseas territory, Mr Bromfield claims there would only be one loser.

The 75-year-old trader, who has lived on the Rock since 2005, spoke as a far-right Spanish party said it should be “liberated” from the UK.

Dismissing the outlandish statement, he said needlessly cutting off more than £1.3billion of exports Spain sends to Gibraltar annually would cost it “dearly”.

And a recently installed “roll-on, roll-off” port ramp would allow cargo to be shipped in and out quickly without affecting supply, he said.

READ MORE: Not the quotas we need!’ Fishing boss hits out at Boris’ trade deal

“If Barcelona loses to Arsenal there are problems at the border – it’s childish and silly.

“But it’s not in Spain’s interests to close a border that has so much material being exported which, because of pound sterling, is at a very good rate.”

Mr Bromfield, who campaigned for Gibraltar to vote Leave, does admit that closing the Frontier is a worry for many of the Rock’s 30,000 inhabitants.

He says that Spain knows this, and plays on that fear.

But, despite the country’s desire to rule Gibraltar, he says that in practical terms shutting the border would “cost Spain dearly”.

He explained: “They might threaten to close the Frontier because they know it worries Gibralterans but it wouldn’t make sense.

“Gibraltar is one of Spain’s biggest export markets and a lot of the goods they send there are high-value ones.

“I think Spain could be difficult if they want to. That’s what Gibraltarians have been concerned about since the referendum.

“Normally it’s fine but once every two years there’s a week or so of ‘political triggers’ which causes Spain to throw its toys out of the pram and be difficult.

“Would it be legal to close the border? Certainly not. Would it be sensible? That’s up to Spain but I’m pretty sure they’d say no.

“Thirdly what are the options for Gibraltar?

“They are a lot better than they were in the early 80s when the Frontier was closed.

“So I think working in a worst-case scenario the Frontier will only be an issue if Spain makes it an issue and that will cost it dearly.

“And even if they did (shut the border) I’m sure the United Kingdom would step in and provide everything they need – probably cheaper as well.”

Mr Bromfield said that high-level discussions between all concerned parties are currently ongoing.

But in his 33 years of visiting and living on the Rock, he said it has never been better placed to survive.

This view is backed by website 888casino.com which has a base in Gibraltar.

It said “under no circumstances” would it consider leaving the Rock – where it has been based for years and is a valuable employer.