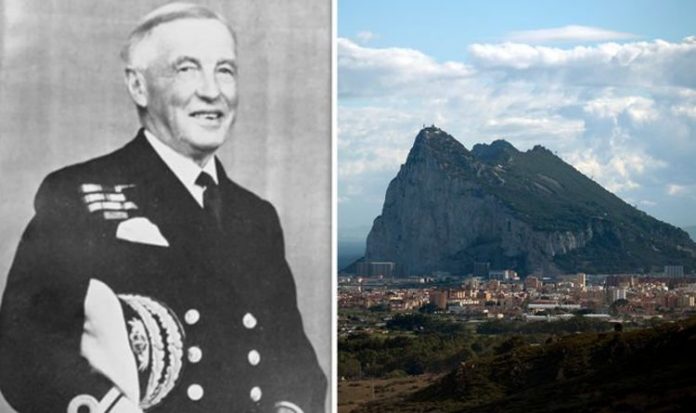 Brexit: UK and Spain agree on draft deal for Gibraltar

During World War 2, the British Overseas Territory served a vital strategic hub in both the Atlantic Theatre and the Mediterranean Theatre, controlling a huge slice of naval traffic. Over the course of the war, Gibraltar came under aerial bombardment from the Vichy French and the Italian Royal Air Force based on Sardinia. Consequently, the decision to increase the strength of the Rock’s defence with more military and naval personnel meant 13,500 Gibraltarians were evacuated to Casablanca in French Morocco.

In a matter of weeks, France was overrun, its colonies run by the Vichy regime and the Royal Navy had attacked the French fleet at its North African base of Mers el Kebir to prevent major warships falling into Adolf Hitler’s hands.

This left the Gibraltar evacuees in French Morocco in a torrid position with a frightening future, as Rear Admiral Sir Kenelm Creighton found when he arrived in Casablanca with 15 battered freighters to repatriate 15,000 French soldiers, rescued from France before the country fell.

After the troops had disembarked, the senior French naval officer demanded Sir Keneln take back the Gibraltar evacuees.

But Sir Keneln refused. His ships were in no fit state – and he believed they would not survive the journey.

The French admiral threatened to arrest Sir Kenelm and impound his convoy, and reportedly forced the evacuees aboard the 15 ships at gunpoint.

The commodore faced orders from his superiors to sail directly to Britain. He ignored those and ferried them back to their nearby homes at Gibraltar instead.

He believed, had they been left in Casablanca, they would almost certainly have been interned in a prison camp in much worse conditions, so picked the lesser of the two evils.

Deputy Chief Minister Dr Joseph Garcia said it was the right time for Gibraltar to show the naval officer “the recognition that his actions deserve”.

He continued: “He stood up for and sympathised with the plight of the people of Gibraltar to the degree that he had to be threatened with arrest by the French and he had no hesitation in defying orders when he judged that following them would have put our people at risk.

Many of Gibraltar’s residents were evacuated (Image: GETTY)

“It takes a brave man to stand up to authority in this way and there is no better time to mark his courageous actions for the benefit of our people.”

A memorial to Gibraltar’s evacuees stands on the Rock’s Waterport roundabout.

The Government had intended to honour Creighton, who served with distinction throughout World War 2, surviving the sinking of his ship on a convoy run to Gibraltar in September 1941 last year, but the pandemic delayed plans.

A plaque acknowledging the naval officer’s role will be added to the monument, bearing the inscription: “In gratitude – Rear Admiral Sir Kenelm Creighton KBE CVO (1883-1963) who in July 1940 assisted the people of Gibraltar in their hour of need.”

Express.co.uk also previously revealed how James Bond author Ian Fleming was central to a secret mission in Gibraltar to “save Britain from losing World War 2”.

Edward Abel Smith, the author behind ‘Ian Fleming’s Inspiration,’ detailed how, after Nazi Germany’s failures in the Battle of Britain, there were concerns that Gibraltar was extremely vulnerable given its close proximity to fascist Spain – a state which, under General Francisco Franco’s rule, was officially neutral but sympathetic to the Axis Powers.

Amid fears Franco’s sympathies to Hitler and Italy’s Benito Mussolini could be solidified in a formal alliance, the British came up with Operation Tracer – a covert mission created by Mr Fleming to send six Britons to hide in the Rock of Gibraltar for a year.

If the British Overseas Territory was invaded by the Nazis, or if Spain decided to join the Axis, it would become a key stronghold for Hitler and may have ultimately changed the outcome of the war.

Mr Smith said: “The mission was broken down into a few sections, the first one was if Spain was to fall, and it had two sub-groups – Spain falls to Germany or Spain volunteers to join Axis.

“One of which was sabotage, as soon as this happened they needed to have commandos on-site to be able to help destroy mission factories, ports and airfields, these two operations were called Operation Sprinkler and Operation Sconce.

“The second part was to be able to maintain that, to train up pro-Allied Spanish individuals to build a resistance, but it turned out Fleming and Godfrey didn’t have a lot of trust in these individuals.

The RAF fended off the Luftwaffe in the Battle of Britain (Image: GETTY)

“So that’s what led to Operation Tracer, they wanted to be responsible as the British to be able to monitor Gibraltar and the shipping channels.”

By the end of 1940, Hitler was beginning to turn his attention away from Britain, though, and looked to the ideological war he had talked up for over a decade – against the Soviet Union.

Operation Barbarossa – Nazi Germany’s invasion of the Soviet Union in 1941 – would lead to three-quarters of the Wehrmacht focused on breaking the Red Army.

Hitler’s decision to fight a war on multiple fronts is widely seen as being fatal to his expansionist hopes – particularly when US involvement in the conflict was secured after Pearl Harbor.

Just three years later, in 1944, the Soviets had pushed back the German war machine in the east and the Allies had started the liberation of France.