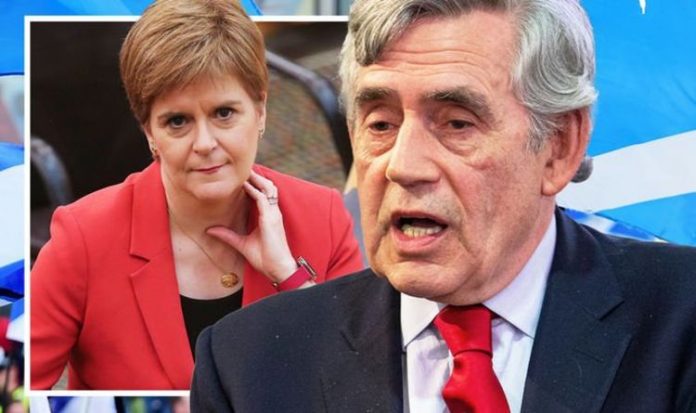 Gordon Brown said this week that the UK is in danger of becoming a “failed state” as he urged politicians to fight against Scottish independence. A Sunday Times poll released last week showed that people in all four nations of the UK believe Scotland will leave the union in the next decade. Mr Brown said the UK “must urgently rediscover what holds it together and sort out what is driving us apart”. He warned: “The world’s most successful experiment in multinational living is under greater threat than at any time in 300 years.

“I believe the choice is now between a reformed state and a failed state.”

The former Labour leader made the claims in a column for the Telegraph.

He has reportedly held talks with pro-unionist politicians, including Michael Gove, on how to respond to the SNP’s momentum.

However, one commentator has hit out at the former Prime Minister, saying Mr Brown is “not the man to save the union”.

News Editor at ConservativeHome, Henry Hill, said “Gordon Brown is as responsible for our constitutional mess as anyone”.

Mr Hill said: “Just like the Tories before them, Scottish Labour have collapsed and ceded their role in Scottish politics to the SNP.

“But given Labour’s previously hegemonic position, that failure is an order of magnitude more catastrophic for the Union.

“Brown…was one of the masters of Labour’s policy on Scotland at a time when Labour’s Scottish policy was the only one that mattered. A simple question: are his party or his country stronger after those efforts, or weaker?”

Mr Hill, writing in his CapX column, argued that while Mr Brown can be a useful campaigner against independence, he has a “deep seated aversion to criticism” which means he shouldn’t lead the pro-union argument.

Ahead of Scottish elections in May, Scottish Labour’s situation looks bleak after the resignation of Richard Leonard – the former leader of the party.

She said: “The growth in support does not change the legal arguments. Either they have the power or they don’t – a mandate makes no difference.

“The reason a mandate is important though is because in 2011, when the SNP last won an overall majority, David Cameron’s agreement to facilitate a referendum at that point had a mandate.

“If the SNP then gets an overall majority in May, then it will be difficult to dispute that mandate, but that’s a political argument.