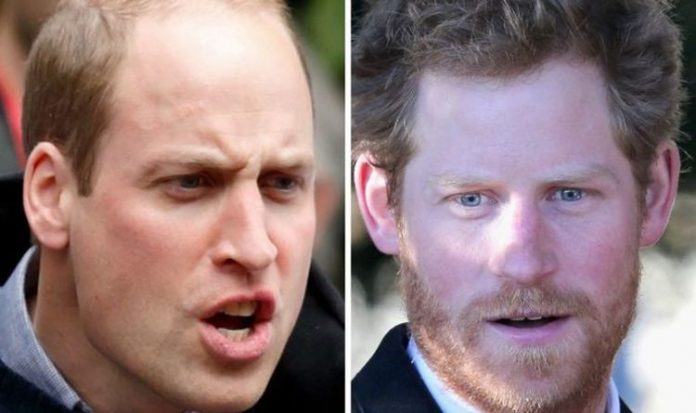 More than a year has passed since Harry and Meghan Markle left the UK for what they perceived as greener pastures in North America. “Megxit” shook both the Royal Family and the British public, especially after the announcement was made via an Instagram post. Relations between the two and the rest of the Firm had been tense even before the departure news.

Unease was particularly present between Harry and his brother, Prince William.

After Harry announced he would be leaving the UK, he and William did not speak for two months, royal author Omid Scobie claimed last year.

It wasn’t the first time the brothers had fallen out or sniped at each other.

Through the years, reports of their childhood tussles have surfaced more than once.

Prince Harry: The Duke offered his brother the ultimate snub over his loss of hair (Image: GETTY)

Megxit: It has been more than a year since the pair left for a ‘private’ life in North America (Image: GETTY)

Perhaps the most memorable snub came during a royal visit abroad.

When a portrait of Harry and William was completed in 2010 and presented to them in Barbados, Harry said his hair was “too ginger”.

He then turned to his brother’s head of hair, or lack thereof, and noted that William’s head had not been painted bald enough.

Harry, who was at the time 25, was given a copy of the picture of him and William in military uniform as a gift during their charity visit.

JUST IN: Prince Harry sent warning over interfering in US issues

Prince William: The brothers didn’t speak for two months after Harry left, it has been reported (Image: GETTY)

He said: “I don’t know, I’m a little bit more ginger in there than I am in real life, I think.

“And he got given more hair so, apart from that, it is what it is, but it’s nice.

“It could have been worse.”

William started to go bald in the mid Noughties despite only being in his twenties.

Royal siblings: The brothers were extremely close in their younger years (Image: GETTY)

Kate Middleton: Harry was also said to have had a close relationship to sister-in-law Kate Middleton (Image: GETTY)

One of the most notable and first pictures of his thinning hair was taken while he attended a football match during the 2006 World Cup in Germany.

His hairline gradually receded over the years, as well as an expanding “duck-pond” beginning to take shape towards the back of his head.

However, despite being once taunted by Harry, the tide may now be turning.

Dr Asim Shahmalak from Manchester’s Crown Clinic told the publication that the Duke of Sussex has been experiencing the same acceleration of hair loss as William.

He said: “Fatherhood has definitely not been kind to Prince Harry’s hair.

“You can see a definite acceleration in his male pattern baldness in the last few months.

“Stress is a factor in hair loss so the struggles of combining his royal duties with marriage and becoming a father for the first time may be a reason why his hair is thinning noticeably across the top of his scalp.

“A much more significant factor, though, is the strong baldness gene running through the whole Windsor family.

“It started with Prince Philip and has now been passed down to Prince Charles and on to his sons Prince William and Prince Harry.

“William got it first and has the strongest baldness gene of all the royals – he was losing a lot of his hair in his early 20s.

“Harry’s baldness was slower to take off but now, aged 34, he is catching up his brother fast, particularly in the crown area.”

Baby Archie: It is unclear when the pair will return to the UK with Archie (Image: GETTY)

The brothers’ brutal banter has also been found elsewhere.

When asked about what music they listened to, and what they got up to in their spare time, William said: “We’re quite similar,” to which Harry replied: “Very similar.”

William added: “I’d say his (Harry) is pretty shocking actually but mine was quite good.

“But apart from that we tend to pretty much like the same music.”

Harry, without a comeback, looked at Ant and Dec and smiled.

It is unclear how much, if at all, the brothers have spoken since Harry’s move.

Things have been made more difficult following the onset of the coronavirus pandemic.