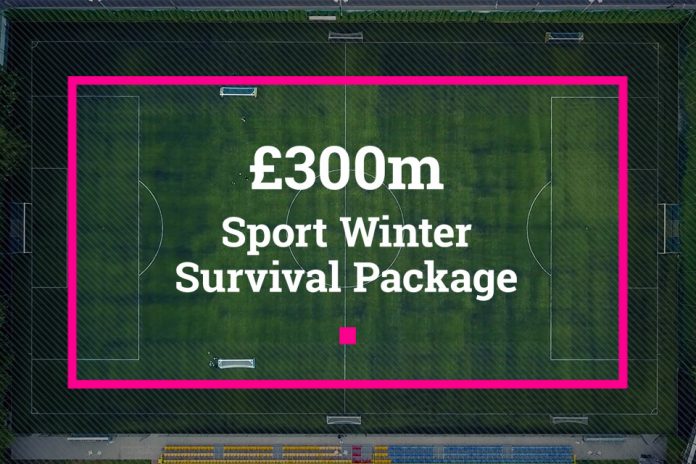 Major spectator sports in England will receive a combined £300 million cash injection to protect their immediate futures over the winter period, the Government has announced.

The Sports Winter Survival Package will support sports – from national governing bodies through to clubs – impacted by coronavirus restrictions.

The funding, which will be largely composed of loans, is the most generous of any Government for its domestic sport sector in the world, and will focus on sports severely impacted over the winter.

Preliminary allocations have been made on a needs based assessment process and reflect the submissions made from the individual sports, and the funding process will be overseen by an independent decision-making board and supported by Sport England.

Today’s announcement builds on support the government has already given the sport sector to help it stay afloat during this difficult time. Earlier this year the Government stepped in to protect rugby league with £16 million in emergency loans, and in October announced that £100 million would be provided to support council-run leisure centres most in need. Sport England announced a £220 million emergency fund for grassroots clubs in April.

These interventions were on top of the multi-billion pound package of business support from the Treasury that have enabled many sports clubs and leisure businesses to survive, including the furlough scheme and business interruption loan scheme. Sports have accessed many hundreds of millions of pounds of support through this.

Sports clubs are the beating hearts of their communities, and this £300 million boost will help them survive this difficult winter period.

We promised to stand by sports when we had to postpone fans returning. We are doing just that by delivering another £300 million on top of existing business support schemes.

Britain is a sports powerhouse, and this Government will do everything we can to help our precious sports and clubs make it through covid.

Over the past few weeks we have worked tirelessly with sport governing bodies and clubs across the country to fully assess what support is needed, as a result of the decision to postpone the return of fans.

We know the vast majority of sports – many of which operate on tight financial margins – have been making serious cost reductions, such as locking down grounds, taking up the furlough scheme for many staff and halting excess payments.

Whilst the Government’s overall economic package has provided a significant buffer, it is absolutely right that we now intervene to protect entire sports, and the communities they support, as we navigate this pandemic.

Sport is a key part of our national life, an important contributor to our economy and a key hub within many communities.

Protecting that sporting heritage and supporting as many jobs within the sports sector as possible is an important step in ensuring that our economy can bounce back from the impacts of the covid pandemic. Alongside this financial support, we now need to ensure that fans can return to sports events as soon as it is safe to do so.

These are unprecedented times for our sector, and those sports and leagues that rely so heavily on spectators for their income that have been especially impacted by the pandemic. The role they play in their local communities is vital and this package of support from Government will be hugely welcomed.

Alongside our wider support for grassroots and community sport, Sport England is working very closely with Government colleagues on the design of this fund and we look forward to playing a key role in its successful and swift delivery.

Full details on the Sports Winter Survival Package, including when it will open, eligibility and how to apply, will be announced by Sport England in due course. It is expected that the first tranche of funding will be distributed in the coming weeks.

Preliminary breakdown of funding by sport, based on needs assessment:

Please note these are all indicative figures based upon provisional returns provided to DCMS to produce an initial assessment of need. Each sport will need to go through an application process to access the support they are eligible for under the final design of the scheme. The final amount received by each sport/organisation may differ from the amounts set out above when final decisions are made by an independent decision-making board, and supported by Sport England.