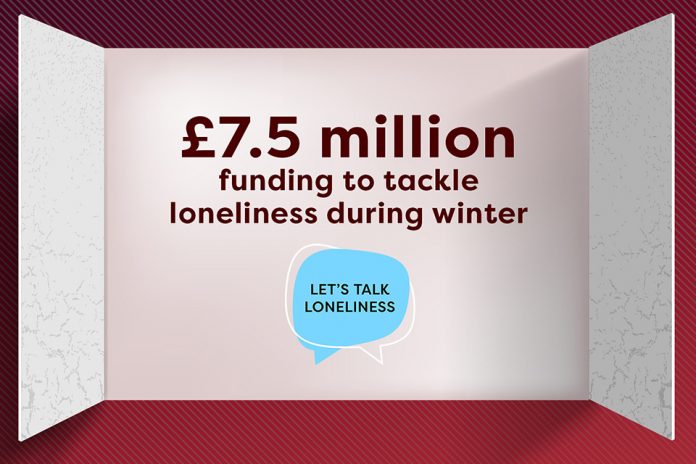 The Government has announced a £7.5 million funding package to help tackle loneliness over the winter period.

Following the recent news about the Tier 4 measures and with more people finding themselves alone this Christmas, this funding package will help provide immediate and targeted relief to those most at risk.

The funding will be targeted at sectors that are well-known for having the power to bring people and communities together such as the arts, libraries, charities and radio. It will be a lifeline to cultural organisations, charities and local community groups who are delivering much-needed work to ensure no one feels isolated in their local community.

The funding will be distributed via three existing schemes:

The package builds upon the £4 million Local Connections Fund announced earlier this month, which will provide hundreds of small grants to charities and small grassroots organisations – such as book clubs, walking groups and other local projects – that are bringing communities together and reducing social isolation. Applications for the Local Connections Fund will open in early January.

We are coming to the end of one of the toughest years we have ever had to face and I know that the next few months will be a worry for many people who have felt particularly isolated or lonely during the pandemic.

We still have some difficult times to overcome and it is important that we continue to provide support to those most at risk of isolation and loneliness over the next few months.

There is already such important work being done in the arts, library and radio sectors to help bring people together and tackle loneliness. I am thrilled that the £7.5 million funding package will have an immediate impact on those who need it most.

Some of the grants awarded by Arts Council England will be distributed via two existing programmes: Creative People & Places and Celebrating Age, which create opportunities for social connections through arts and cultural spaces in the community.

Creative People and Places has achieved over 5 million engagements to date in England. The Celebrating Age programme supports older people to engage with arts and culture as well as encouraging cultural spaces and organisations to be open, positive and welcoming places for older people. It has so far reached over 26,000 people.

The remainder of the Arts Council funding will be awarded to enhance and expand two successful programmes delivered by The Reading Agency: Reading Well Books on Prescription and Reading Friends. Funds will be used to provide the Reading Well mental health book collections for children, young people and adults to all public libraries in England, as well as significantly expand the delivery of Reading Friends through libraries – a shared reading model which uses reading to bring people together and tackle loneliness. An evaluation of Reading Friends found that 83% of participants and 95% of volunteers felt connected to other people after taking part.

From hosting virtual versions of groups like Rhyme Time to making more of the most popular titles available for loan as ebooks, libraries across the country have adapted quickly to the pandemic so they can continue to act as a crucial community resource to people of all ages, and protect them from the risk of isolation.

This funding will enable The Reading Agency to deepen and widen the impact of their partnerships with libraries. It will also allow libraries’ invaluable work to continue, with a particular focus on providing reading materials and support on how we can look after our mental health during this challenging winter period.

DCMS will also be extending the existing Loneliness Grant Fund, to ensure that some of the organisations selected earlier this year can expand their current programmes or reach into new areas. This will help to ensure that these national organisations providing vital support for a wide range of vulnerable people at risk of loneliness, including the elderly, veterans, and people with disabilities, can support even more people.

In May nine organisations, including the EFL, RNIB, Alzheimer’s Society and MIND were awarded a share of £5 million to reduce loneliness.

The remaining £500,000 will be distributed via two existing radio funds: the Community Radio Fund (CRF) and the Audio Content Fund (ACF).

Around 300 not-for-profit stations, staffed largely by volunteers, broadcast to around a million listeners per week, providing a lifeline to local communities who rely on these stations for up-to-date news and entertainment. These stations have been hit hard by the pandemic, with advertising revenues having dropped significantly. The CRF will provide £200,000 emergency funding to help stations meet the core costs of continuing to provide their vital services.

The Audio Content Fund exists to finance high-quality, public service radio programming for broadcast on UK commercial and community radio. The ACF will receive £300,000 to support the creation of content which will make listeners feel less lonely and connect the vulnerable with their communities this winter.

In addition, £600,000 will support small commercial radio stations with their transmission costs, and help secure their futures into the new year.

Today’s announcement builds on previous work by the Government to reduce loneliness during the pandemic. Over £24 million of the £750 million charity funding package has gone directly towards reducing loneliness, and a further £45 million to organisations supporting people with their mental health.

And in June DCMS relaunched its long-running campaign, Let’s Talk Loneliness, to remind people that there is no shame in asking for help. The website has lots of useful advice on how to help yourself and others safely.

Throughout December, DMCS are delivering a Let’s Talk Loneliness advent calendar that shares practical advice, inspiring stories, and support routes to encourage people to take the first steps to alleviate loneliness in themselves and others.

Part of radio’s magic is its ability to bring listeners together and this year more than ever it has played a vital role, giving accurate and up-to-date news as well as entertainment to vulnerable, lonely and isolated people.

Today I am pleased to make a further £1.1 million in emergency funding available to the sector to make sure many of its brilliant programmes continue and smaller stations can keep providing the services so valued by communities.

We’ve seen the enormous impact programmes such as ‘Creative People and Places’ and ‘Celebrating Age’ and the lifeline they often provide for their communities. This new investment will build on the achievements of those programmes at a time when isolation and loneliness are affecting more people than ever before.

We are delighted that this new programme will reach those in greatest need, especially at such a challenging time.

The Reading Agency is extremely grateful to receive this funding from DCMS. Tackling loneliness and mental health issues across the country has always been a priority for us and sits at the heart of our mission of tackling life’s big challenges through the proven power of reading. 2020 has demonstrated that our work is needed more than ever, and this funding means that we are able to support the important work of every public library in England.

We are immensely proud of our Reading Well and Reading Friends programmes and look forward to expanding their reach and impact with thanks to this funding and by working in partnership with public libraries to aid the country’s recovery in 2021. This feels like a real vote of continued confidence in the role of public libraries and their important contribution to society”.

Having demonstrated earlier this year how quickly and effectively the UK radio sector was able to mobilise to support its audiences, we are delighted that the UK government has come to us to distribute these funds. We know the audio production sector and our partners at radio stations will rise to the task, despite the need for a quick turnaround. Radio has always been brilliant at companionship, and we look forward to hearing brilliant ideas for demonstrating this under these circumstances that remain difficult for so many people”.

Over the last three years, the UK Government has been leading the way on tackling loneliness: