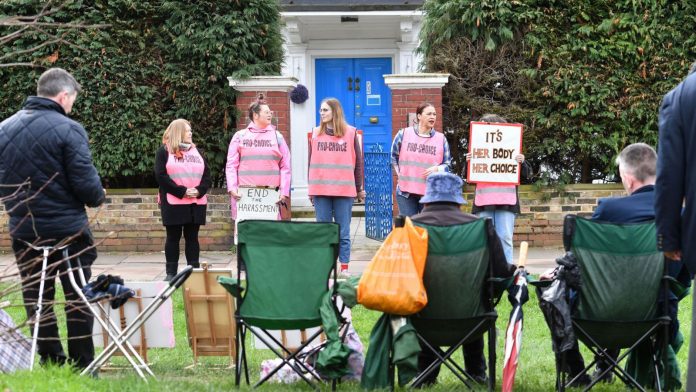 Campaigners have reacted with fury after the government decided against introducing buffer zones outside abortion clinics, accusing ministers of treating thousands of women as “acceptable collateral damage”.

Home Secretary Sajid Javid said introducing protest-free areas outside clinics nationwide to stop the harassment of patients was “not a proportionate response”.

He said that although examples of harassment and damaging behaviour had been found, such as the handing out of model fetuses, displaying graphic images and blocking patients’ paths, these were not the norm.

Mr Javid said he recognised that all anti-abortion activities, passive or otherwise, can have an adverse effect on women and expressed his sympathies to those who had been impacted.

But he said: “Having considered the evidence of the review, I have therefore reached the conclusion that introducing national buffer zones would not be a proportionate response, considering the experiences of the majority of hospitals and clinics, and considering that the majority of activities are more passive in nature.”

Labour’s Diane Abbott said the move “has given the green light for women to be harassed and abused for exercising their right to choose”.

The shadow home secretary said it was a “disgusting failure to uphold women’s rights over their own bodies” and called on Mr Javid to “urgently reconsider.”

There were more than 2,500 responses to the government’s review, with abortion service providers, abortion service clients, anti-abortion demonstrators, police forces and councils providing their views.

More than 30 hospitals and clinics in England and Wales have reported demonstrations outside their facilities, with a small number seeing aggressive activity, the Home Office said.

The main activities included praying, the displaying of banners and leaflets being distributed.

Sister Supporter, which successfully campaigned for a Public Space Protection Order (PSPO) outside a Marie Stopes clinic in west London to stop women being harassed, said it was “disappointed and frustrated”.

“Presumably the thousands of women affected at ‘only 36’ hospitals and clinics are acceptable collateral damage to Sajid Javid, who has not offered any other potential solution to this well-documented problem of harassment and intimidation, preferring instead to state that current police powers should suffice,” they said.

“This goes against all evidence presented both to the national consultation and to the select committee that current police powers are not sufficient to address this issue.”

The group added: “That the Home Office has reviewed this evidence for seven months and has failed to come up with any recommendations other than the status quo is frankly insulting to women everywhere.”

Bpas, the leading provider of abortion services in the UK, said it would try to replicate what happened at the clinic in Ealing at other affected clinics.

It warned that it would continue to lobby for national legislation if the Home Secretary’s suggestions of current remedies did not prove to make a difference.

READ  Labour would likely vote down any Brexit deal - UK

Alina Dulgheriu, from the campaign group Be Here For Me, decided against having an abortion after being given a leaflet outside a clinic.

She thanked Mr Javid for his decision and said her “beautiful” daughter would not be alive today had it not been for the intervention outside the clinic.

She said: “Inside an abortion clinic the only thing they offer is abortion but these women can offer so much more; counselling, financial assistance, help with food, baby clothes and rent among many other things.

“The announcement today means that women who are in similar situations to me will not be denied this life-changing help when they need it most, outside the abortion clinic.”

The Society for the Protection of Unborn Children (SPUC), the world’s oldest abortion opposition group, said the decision was a “massive victory for common sense”.

SPUC director Antonia Tully said: “We are delighted and pro-life people can continue their work in a proportionate way and within the existing law and cause no harm to others.

“It is to be hoped that local authorities will take heed of the decision and reject calls from the abortion lobby to impose such buffer zones within their areas.”