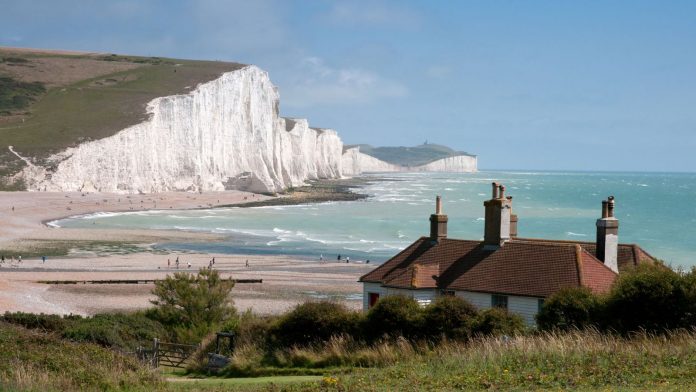 At a National Trust site nestled into Dover’s white cliffs, with a clear view of the Continent, the famous port opens up in its entirety.

The pace with which the roll-on/roll-off ferries unload and upload lorries, straight on to the UK high-speed road network through a snaking system, is remarkable.

It is designed for minimal checks. Indeed, a ferry unloading 180 lorries sees just two of them checked.

At the heart of the recent suggestions from government about the need to stockpile food and medicines in anticipation of a “no deal” Brexit is the fact there is no economic border on the short straits.

The systems, the roads, the ports, and the Channel Tunnel have been designed under treaties that anticipate the UK and the continent remain in the same customs and regulatory territory.

The Channel Tunnel at Folkestone, and the Port of Dover, are best considered continuations of the M20, a rolling motorway that happens to cross the Channel.

Changes to this arrangement bring delays and start to undermine the fast delivery of food and medicines, as well as manufacturing parts, that have emerged out of this system.

The government is now desperate to keep this system flowing and that is the heart of the prime minister’s Brexit strategy, as agreed by ministers at Chequers; the need for the common rule book, the free trade area for goods and the facilitated customs arrangement.

But, that only goes to highlight just what might happen in a no deal Brexit.

On the side of the M20 motorway near Ashford, Kent, the hard shoulders have just been coned off, so that they can be further hardened.

Officially these are works for “Operation Brock”, an interim solution for a long-run successor to “Operation Stack”, deployed to deal with delays at Calais.

The Written Ministerial Statement that pronounced these works did not mention Brexit. At a recent meeting with stakeholders, business representatives burst out laughing at that suggestion.

But, these are no ordinary roadworks. They are to enable the hard shoulder to carry the weight of thousands of parked lorries in a very long queue.

The very first roadworks, at the start of the holiday season, were quietly designed to prepare for no deal Brexit chaos in March.

Their existence anticipates the plausibility of long tailbacks caused by the breakdown of decades of frictionless trade across the short straits between the UK and the continent.

Indeed, it does not require trade to stop for such contingencies to be needed – merely for it to be slowed by an obligation at either border for more checks, of the type that are routine for “third countries” outside the EU.

On 29 March next year, if as some MPs now want, the UK is to leave the EU without a negotiated exit, it is here that a dangerous game of no deal brinkmanship will appear to work spectacularly; or crash at high speed into a brick wall of brutal reality.

It is here where the EU will choose to enforce its customs code, as it has continually pointed to in nearly six dozen Brexit preparedness reports published since the beginning of the year.

Or, it will back down and choose not to, proving the Brexiteers’ point.

This is why Sky News decided to investigate in depth exactly how this system, of frictionless trade both at Dover and the Channel Tunnel will or will not function.

Crucial to this is a relatively small arm of government – Dover District Council.

This is the local authority for the Port of Dover. It is also the Port Health Authority responsible for all food and health checks both at Dover and at the Channel Tunnel.

These are currently “small-scale” as they are carried out at the point of entry into the EU before goods are freely transported into the UK.

An internal Brexit impact report by Dover District Council, obtained by Sky News, questions whether it is “fully understood” by government that the Port Health Authority will not have powers “to physically stop vehicles”.

It also says officials “in the large are blind as to what is entering the port” and the layout of the port means there is “nothing to stop vehicles leaving” Dover.

Overall, it says that there are “inadequate facilities to inspect and store food” and “no facilities to park vehicles waiting for examination”.

Such checks have not taken place since 1992 when the EU’s single market was established.

Neither Dover, nor the Channel Tunnel, are designated “Border Inspection Posts (BIPs)” for products of animal origin, but both are likely to be required after a “hard” Brexit, according to the report.

The nearest BIPs are at Southampton and Folkestone.

But, under UK law, animal product checks must take place at the port of entry to prevent any potential contamination from diseases such as avian flu or foot and mouth disease.

These checks would also require the employment of dozens of new vets, but there is already a shortage.

Industry calculations suggest there are not enough vets across the whole of Europe to operate the required new BIPs after Brexit.

The single market did away with the need for such checks across the EU and fundamentally reduced the need to train vets, which takes several years.

Indeed, the council’s report questions in exactly which country such checks will have to take place – in England or in France.

The report says “current systems are based on juxtaposed controls being conducted in France and England… once outside the EU such [juxtaposed] controls may cease… we cannot begin to surmise.. the substantial work force required to provide a service at the juxtaposed positions”.

This would involve Dover’s port authority setting up food health checks in Dunkirk, Calais and Coquelles (the French entry to the Channel Tunnel).

This is where it gets very complicated. In theory, a no deal Brexit would require new checks.

The 2003 Le Touquet treaty states juxtaposed checks (UK checks in France and French checks in the UK) are for immigration only at Dover and Calais.

But, the 1986 Treaty of Canterbury set up that all controls for the Channel Tunnel should be juxtaposed.

So a no deal Brexit could require a quick emergency deal with France on these two treaties, or invoking some of the emergency clauses within them.

And yet, at Folkestone, where all French Channel Tunnel checks will have to be, there are just two spaces for lorries.

At the facility for UK customs clearance, next to an M20 motorway service station, there are only 80 lorry spaces.

All of which explains why there could be very long queues.

As Sky News revealed in March, the government has been obliging border operators to sign gagging clauses over its ultimate “throw the borders open” contingency plan not to enforce incoming checks.

Trade experts suggest this would be legally questionable under world trade rules.

In any event, the EU has repeatedly said it would immediately enforce its Union Customs Code at the customs and regulatory border created by a no deal Brexit on 30 March next year.

The chief executive of Kent Chamber of Commerce, Jo James, says the real issue is those possible checks at the French border.

“The EU could decide here is the rule book and this applies to you,” she said.

“It could be that every vehicle going into Europe is going to have checks. If Europe enforces its own laws, lorries will have to be checked”.

This is why the Dover report concludes “the current transport infrastructure, which is insufficient to respond to changing border arrangements puts the local and UK economy at risk”.

A measure of the total confusion in government can be gleaned from plans to try and help Kent deal with possible post-Brexit motorway queues.

Officially, the government denied that Operation Brock – which plans to turn a 13-mile stretch of the southbound M20 into a lorry park while the northbound lanes were turned into a contra flow system for normal traffic – had anything to do with Brexit.

And it was not mentioned in the Department for Transport’s Written Ministerial Statement announcing the move.

The changes were merely an interim solution to Operation Stack, it said.

But, at the Highways England consultation attended by Sky News, there were numerous references to March 2019 and to the possibility of new border posts.

In a Freedom of Information response to Sky News, Kent County Council revealed that Operation Brock is in fact an acronym for “Brexit Operations Across Kent”.

The government seems to want to play down turning a lengthy section of the M20 into a lorry park as a consequence of Brexit.

Local industry suggests this is because it is concerned such a reality would bolster support for staying in the EU’s customs union or single market, which is against government policy.

Additionally, Operation Brock will take as much as two weeks to implement.

This is unlike Operation Stack, which only takes a few minutes.

It’s only plausible use is preemptively in March of next year in advance of the UK potentially leaving the EU without a divorce deal.

The government will have to decide to activate it, potentially before actually knowing if a no deal Brexit is going to happen.

The great irony here is the government says it wants to boast publicly about just how ready it is for a no deal Brexit.

However, it has repeatedly tried to deny the single most visible preparation has anything to do with Brexit.

Strategic confusion is rather visible here.

It’s worth noting that both Kent and Dover councils are Conservative-run councils. But, both in their internal reports seem to be rather exasperated with Westminster.

The bigger point is for just how long the 13-mile stretch of the M20 will be turned into a lorry park.

The Dover document anticipates, not weeks or months, but “many years”.

It states: “The permanent solution [to Operation Stack] will not be in place for many years… therefore the ‘temporary’ traffic-management system Operation Brock will be in force for some time.”

A separate document from Kent County Council anticipates it will be in place until 2023 at the earliest.

The Kent document further mentions using Manston airfield, and Ramsgate port, for parking lorries if the M20 plans do not work.

There is also some concern about whether it will actually be ready in time.

The system “needs to be delivered before any change to customs arrangements in March 2019” and “there does not appear to be a plan B”, says the Dover document.

Tim Allen, who runs a family-owned parts manufacturer just outside Ashford, is deeply concerned about a change to free-flowing frictionless European trade,

This is vital to him and his customers in car manufacturing across the continent.

“If we do end up with border checks we know how a relatively minor problem absolutely jams up the roads around Ashford and Kent, so I am extremely worried we might find the road network paralysed and we cant get goods in we cant get goods out,” he said.

“I’m begging the government to make a decision and make it quick… in business making no decision paralyses a business, in politics it seems to keep you in power.”

The irony about all of this?

The government officially agrees with these fears, in as much as it provides support for Theresa May’s Chequers proposals.

But, at the same time, it does not agree with them in as much as they are surely a likely consequence of a plausible no deal Brexit scenario.

It’s not just lorries. Local government internal reports show central government too is getting a little lost on the M20 in Kent.