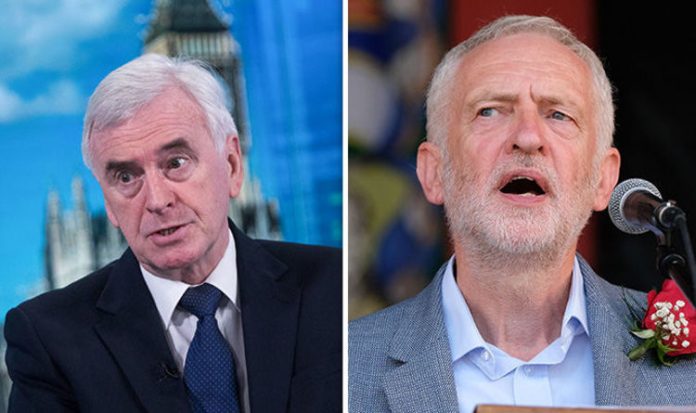 Shock claims suggest Mr McDonnell, who is a close ally of Mr Corbyn’s, particularly demanded an end to disciplinary proceedings against Dame Margaret Hodge after she allegedly swore at the Labour leader and called him an antisemite.

The former Labour Cabinet minister is a Jewish MP who lost family members in the Holocaust.

According to The Times, a senior shadow cabinet source has said that Mr McDonnell’s comments were welcomed by other shadow ministers.

The source said: “We are not comfortable at all with the way Jeremy has handled this and don’t know why we have got ourselves into this mess.

“Strong words have been said to him by people who are close to Jeremy.”

When the source asked if McDonnell had asked Corbyn to climb down, the source said “yes”.

It comes as another of Mr Corbyn’s allies in Labour has been recorded saying that Jewish “Trump fanatics” are making up some of the allegations of antisemitism in the party.

The recording of Peter Willsman MP was released this week by the Jewish Chronicle.

The Labour MP Luciana Berger, who is the parliamentary chair of the Jewish Labour Movement (JLM), responded to the recording by calling for the party to suspend Mr Willsman and conduct a formal investigation.

She told the Jewish Chronicle: “Anyone listening to this recording will be appalled to hear the venom and fury directed by Mr Willsman at the British Jewish community.

“That he accuses the Jewish community of falsifying social media and being ‘Trump fanatics’ in order to deny the serious concerns of 68 rabbis beggars belief.”

Speaking on the BBC’s Today programme last week, Mr McDonnell said: “We are against anti-Semitism. We are a party that attacks anti-Semitism wherever it is, either in our party or in our community.”

It comes following claims the Labour Party is investigating 252 people, including party members, following a series of anti-Semitic attacks on Dame Margaret.

Slurs included an activists on a Facebook group calling for her to be “deported to her homeland Israel”.

Meanwhile, MP Ian Austin is being investigated for allegedly shouting at party chairman Ian Lavery during an anti-Semitism row. Mr Austin denies the claims but admits feeling “ashamed” to be in the Labour Party.

The MP for Dudley North is the son of a Jewish refugee.