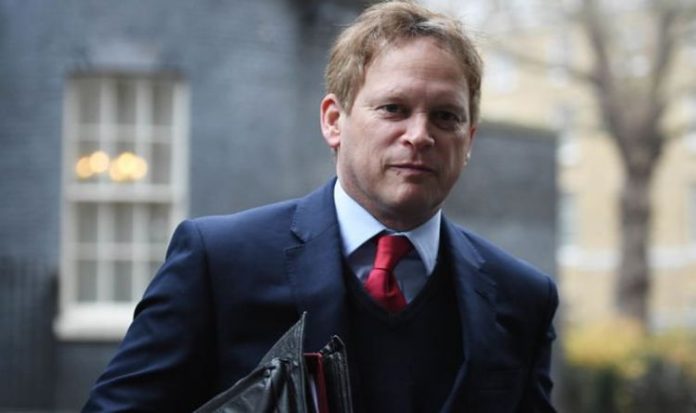 Mr Shapps praised NHS staff for their “extraordinary patience” in the face of “relentless” pressure during the pandemic. “The work they do is incredible, I speak to them every single day, of course, we have not been able to visit my dad for two months now,” he said. “What they have been doing for nearly a year now has been extraordinary and, as you said, it has of course been worse now, even though numbers are coming down in hospital.”

Mr Shapps told how his father is quite “techy” so they have been able to speak regularly by mobile phone, but making contact in the last couple of days has been difficult.

He said the “good news” was that his father was moved to a smaller coronavirus ward this week after a fall in the number of covid patients at the hospital.

“But even now, even with that reduction, it’s still higher than it was in the first peak so we are not out of this yet, we just need to adhere to the lockdown and to the rules to stop more people ending up in those hospitals,” Mr Shapps said.

“It is very difficult. I know that quite often people think that people in authority or power or in public service live a different, gilded life.

“The truth is, you live the same life as everyone else, and coronavirus, that gets everybody, got my dad.

“It wasn’t the reason he went into hospital originally but unfortunately he did pick it up and we’re all very worried.”

Mr Shapps said that he had been speaking to nurses about his father’s condition when possible, but said staff were “very, very pressed” and that hospitals remained under “immense pressure”.

“I do just pay tribute to their extraordinary patience,” he added.

“Not only with the patients themselves, who sometimes can be quite distressed as my dad has been, but also just the relentless pressure of this and the hours that they have been working.”

He went on: “The Prime Minister will say more about the route to unlocking this country, starting when he speaks about it on February 22.

“But we don’t know yet whether that will include information on things like holidays, simply because we don’t know where we’ll be up to in terms of the decline in cases, deaths, vaccination.

Mr Shapps indicated that travel restrictions may not be eased until everyone in the UK – and potentially in overseas destinations – has had their coronavirus vaccinations.

Asked in an interview on BBC Breakfast what needs to change for travel restrictions to be lifted, he replied: “First of all, everybody having their vaccinations.”

Pressed on whether the rules will remain in place until that happens, he said “yes”, before explaining that Boris Johnson will set out a “road map” for relaxing lockdown measures on February 22.

He added: “It depends on both the level of vaccination here and, critically, elsewhere.

“We’ve done 13 million-plus vaccinations, which is just more than the whole of the EU put together.

The UK has vaccinated over 13-million people (Image: Getty)

“So we’ll need to wait for other countries to catch up as well in order to be able to do that wider international unlock, because we can only control the situation here.”

Mr Shapps claimed last month he is “the last person you should take travel advice on this from” as he was forced to leave a family holiday in Spain just hours after arriving due to a change in quarantine rules.

England’s deputy chief medical officer Jonathan Van-Tam said it was “plausible” for other countries to require people be vaccinated against Covid-19 before they travel.

He told the BBC: “I can’t tell you how other countries are going to react to us, react to the idea of international travel in the post-Covid pandemic world, and whether in fact other countries will themselves insist that visitors are vaccinated, I don’t know the answer to that.

“And I don’t think other countries yet know the answer to that. “

He added it was “certainly plausible that people will start to frame things that way” because of concerns about the spread of variants”.