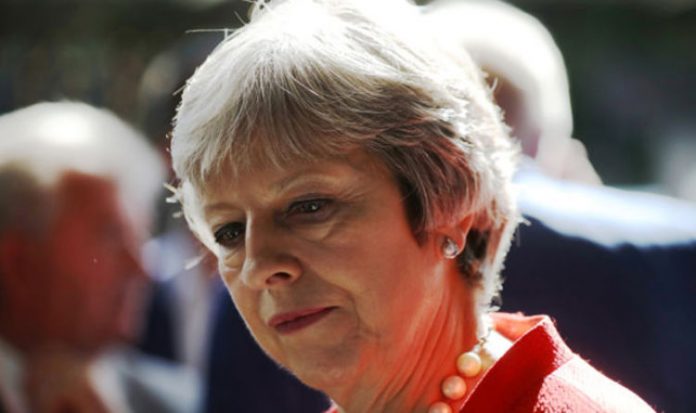 Mrs May’s blueprint for future relations, hammered out by ministers at her Chequers residence, which led to foreign secretary Boris Johnson and Brexit secretary David Davis quitting over its plan to keep close ties to EU rules, has already received a lukewarm reception in Brussels.

Yesterday’s reports showed she still has a mountain to climb to win over her own party at home.

Mr Kellaway said he backed Mrs May and that a Downing Street briefing about the White Paper “went down very well” and had “cheered him up”.

But the local councillor added: “I think we have reached the stage that if we don’t get a deal around these terms, then we’ll have to break away. If it were to be diluted it would ultimately not be acceptable”.

Conservative MP Andrew Bridgen, who has submitted a formal letter to party chiefs voicing no confidence in Mrs May, also warned: “The revolt in the party in the country over Theresa May’s Brexit betrayal is now reaching boiling point.

“Local Conservative associations are in uproar. Our grassroots activists, the bedrock of our party, want Mrs May to abandon her disastrous proposals or fall on her sword.”

He added: “It’s very telling that she’s even pushed her own local chairman to the very limit. And undoubtedly the EU will want further concessions.”

A Tory HQ programme to win activists over to the plan will continue over the summer.

However, Conservative MP Philip Davies told the Daily Express: “The more people see of the Chequers deal, the more they see that it doesn’t ensure we properly leave the EU.”

Meanwhile, Italy’s deputy prime minister joined the calls for firmer action and said the Prime Minister should take a hard line with the EU over Brexit negotiations or risk being cheated.

Matteo Salvini, leader of the Right-wing anti-immigrant party the Northern League, claimed there was “no objectivity or good faith from the European side”, adding: “My experience in the European parliament tells me you either impose yourself or they swindle you,” he said.

Mr Salvini added that the Prime Minister should be prepared to walk away without a deal, saying: “On some principles there is no need to be flexible and you should not go backwards.”

A Downing Street source said: “We accept we have to continue to make the argument, both in the UK and across Europe.

“But we are con dent as we continue to promote the deal that more people will understand that it not only respects the referendum but delivers for the whole of the UK.”