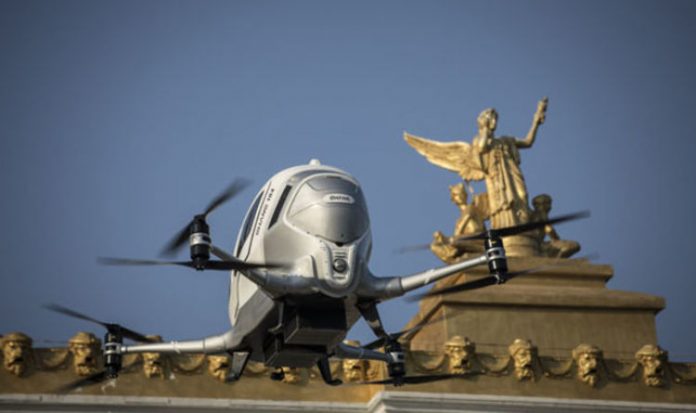 The Government is also announcing £12million new investment in research into self-drive and internet-connected vehicles.

Transforming Britain’s transport is one of the “grand challenge” missions in the Government’s Industrial Strategy.

It wants to make all new cars and vans by 2040 to be effectively emitting no greenhouse gases, and is examining how technology can revolutionise transport and in turn Britain’s congested urban spaces.

Two Government documents out today envisage how travel around the UK could dramatically change with the introduction of flying vehicles and the widespread use of self-driving and shared vehicles.

In turn ministers believe these could reduce the need for city centre parking spaces, opening areas up for potentially hundreds of thousands of homes while also drastically improving air quality.

The papers fire the starting gun on the Future of Mobility Grand Challenge, which seeks to make the UK world leaders in the movement of goods, services and people.

It includes £12.1million of funding for six projects working on simulation and modelling to aid the development of “connected” vehicles – those with technology to communicate with each other and with other things like traffic lights and cameras to give drivers information about jams – and “autonomous” vehicles – more usually known as self-drive, not needing a human to be in charge.

The work is seen as essential to test and prove vehicle safety.

The Government is also calling for views from industry and others ahead of a fuller policy proposal about the potential opportunities, obstacles and dangers entailed in likely transport developments, to help Britain get ahead of the competition.

The initial aim is to explore regulatory barriers to technological and service innovation, and how data can be better used to improve transport, as well as the potential disadvantages of some technologies.

The possibilities the Government envisages include not only increased use of drones which cities are already pioneering to help emergency services, but the possible introduction of aerial passenger vehicles.

It thinks the distinction between taxis and buses could blur, with people being able to “hail” buses to where they are, and making it easier for people to book and pay fares on their phones.

Other issues the Government wants to explore is how to reach its 2040 zero emission target, and prepare for the widespread use of self-driving and connected vehicles.

For example, a self-driving car that took someone to work then drove itself home for the day could reduce the need for city centre car parking spaces.

The Government also forecasts a growth in shared transport as people become less demanding about owning their own vehicles and a growing population of elderly people who cannot necessarily drive themselves safely.

That could include people renting cars from each other and more commercial ride-sharing arrangements, further reducing congestion.

Transport Minister Jesse Norman said: “The UK has a long and proud history of leading the world in transport innovation and our Future of Mobility Grand Challenge is designed to ensure this continues.

“We are on the cusp of an exciting and profound change in how people, goods and services move around the country which is set to be driven by extraordinary innovation.

“This could bring significant benefits to people right across the country and presents enormous economic opportunities for the UK, with autonomous vehicles sales set to be worth up to £52billion by 2035.

“This call for evidence marks just one stage in our push to make the most of these inviting opportunities.”