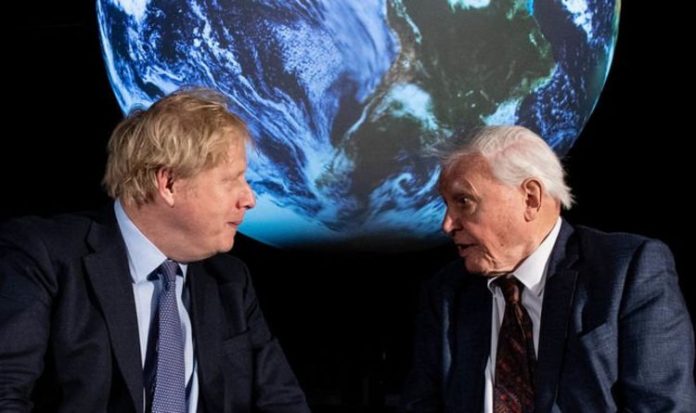 Sir David will claim that November’s COP26 climate summit may be “our last opportunity” to bring down emissions. The warnings were issued as Lord Deben, the Climate Change Committee chairman, backed the Daily Express green campaign which is urging the Government to change the tax regime to favour the environment. Before today’s virtual meeting of the UN, Mr Johnson said: “The UNSC is tasked with confronting the gravest threats to global peace and security, and that’s exactly what climate change represents.

“From the communities uprooted by extreme weather and hunger, to warlords capitalising on the scramble for resources – a warming planet is driving insecurity. By helping vulnerable countries adapt to climate change and cutting global emissions to net zero, we will protect not only the biodiversity of our planet, but its prosperity and security.”

Sir David said: “If we bring emissions down with sufficient vigour we may yet avoid the tipping points that will make runaway climate change unstoppable.

“In November this year, at COP26 in Glasgow, we may have our last opportunity to make the step-change.

“If we view climate change and the loss of nature as worldwide security threats then we may yet act proportionately and in time.”

Britain is committed to Net Zero by 2050, but in the run-up to next month’s Budget, Lord Deben called for a shift in the fiscal system to accelerate the greening of Britain.

He highlighted taxes that favour polluters over the environment, including 20 per cent VAT on the sale of electric cars – the same as diesel and petrol vehicles. He wrote: “The Government must make it easier and cheaper to do the right thing and harder and more expensive to trash nature.”

He urged Britain to copy Norway’s tax incentives for electric cars which now account for 54 per cent of sales there.

The Treasury stressed that Mr Johnson’s 10-point plan for his Green Industrial Revolution included £12billion of Government funding for low carbon technologies such as electric vehicles.