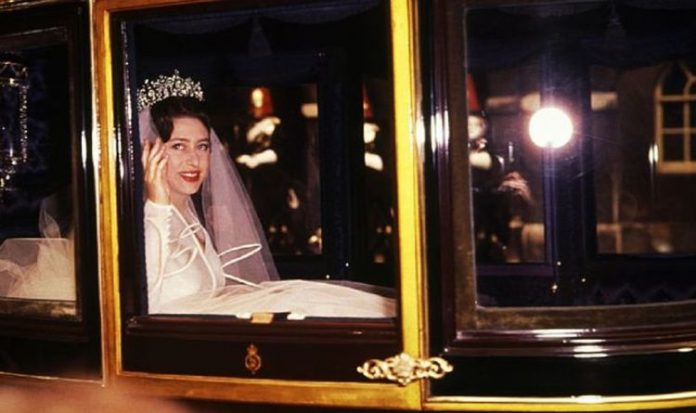 The glamorous younger sister of the Queen married the British photographer and filmmaker Anthony Armstrong-Jones on May 6 1960. The royal wedding took place at Westminster Abbey and the Princess was walked down the aisle by her brother-in-law Prince Philip. Margaret chose a statement-making accessory for her big day and by doing so broke with convention.

Instead of wearing a tiara borrowed from the royal collection, the free spirited Princess adorned her head with the stunning Politmore tiara, which she had purchased at auction a year before her marriage.

The tiara was commissioned by Lady Politmore in 1870 from the jeweller Garrard.

She was the wife of the second Baron Politmore, treasurer to Queen Victoria’s household from 1872 to 1874.

The tiara remained in the Poltimore family, until purchased at the auction by Margaret.

The Princess showed off her exquisite jewellery item before her wedding day, wearing it as a fringe necklace on several occasions prior to taking her marriage vows.

She would also wear it as a necklace and brooch on State and official functions during the course of her life.

READ MORE: Queen erupted at Prime Minister after she ‘reached end of her tether’

Ms Bartos explained: “She was an independent minded princess, very much of her time, the culturally roiled and transformative 1960s and 1970s.

“She was then a glamorous party girl married to a hip photographer and design aficionado.

“And yet, she was also, always, a Royal princess, only sister to the Queen, a Princess who never relinquished her royal sense of herself, her royal hauteur. She was always Ma’am.”