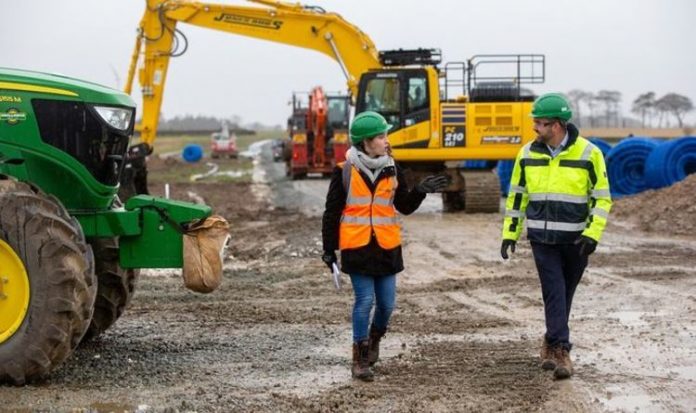 The UK is already a world leader in offshore wind with more installed capacity than any other country. But the Government has ambitious plans to invest billions more. Chancellor Rishi Sunak will unveil the Government’s National Infrastructure Strategy today alongside his spending review.

He is expected to outline billions of pounds worth of long-term investments in the climate sector to help the Government reach its goal of net-zero emissions by 2050.

The announcements follow the Prime Minister’s 10-point plan to create 250,000 green jobs and build back greener from coronavirus.

Energy minister Kwasi Kwarteng said: “We find ourselves at the beginning of a new, green industrial revolution. A revolution that will rein in climate change and leave our planet in a better state than we found it. And one that will provide thousands of good jobs and a better quality of life for millions across the UK.”

The world’s largest offshore wind farm is under construction off the east coast of Yorkshire and is set to create hundreds of jobs by the time it becomes operational in 2023.

Dogger Bank Wind Farm will play a “significant role” in the Government’s goal of reaching net-zero emissions and delivering 40gigawatts of offshore wind by 2030.

The UK’s offshore wind farms have an installed capacity of 10GW, and Dogger Bank will increase this by 3.6GW – powering 4.5 million households.

The site is a partnership between Scottish firm SSE Renewable and Norway’s Equinor, costing up to £9billion to build.

Stephen Bull, of Equinor and chair of RenewableUK, said: “The UK itself is leading not just in terms of the numbers of the 10GW of offshore winds already in theUK but also the clarity that the Government has given to the rest of the global offshore wind industry.

“It has talked about 40GW. No other country in the world talks about these kinds of numbers. The UK is clearly there. It sees offshore winds as the most favoured technology as well, so it’s settled the direction here.”

Steve Wilson, Dogger Bank’s project director, added: “We’re doing so many things that are a first for the industry that could help secure and sustain the industry in the future.”

The project has engaged British firms, such as Welsh civil engineers Jones Bros, to lay cabling.

Garod Evans, contracts director at Jones Bros, said: “It’s really exciting that these projects are being pushed by the Government because it gives us massive opportunities.”

There are 39 fully operational offshore wind farms in UK waters, with five under construction and a dozen more in the planning stages.

Two centuries ago Britain was at the forefront of the Industrial Revolution.

The effect on lives and livelihoods was the most profound in history, taking our country to new heights of prosperity.

It was powered by the coal mines of Northumberland, the cotton mills of Lancashire and the shipyards of Glasgow.

Today we find ourselves at the beginning of a new, green industrial revolution. A revolution that will rein in climate change and leave our planet in a better state than we found it.

And one that will provide thousands of good jobs and a better quality of life for millions across the UK. This is not a pipedream. This is happening now.

Last week the Prime Minister set out his 10-point plan to help the UK lead the way in this new industrial revolution.

It sets out innovative ways to tackle climate change while creating jobs.

That is why we are investing in new, clean technologies like hydrogen and carbon capture and storage to help industry go green, as well as helping car manufacturers to transition to electric vehicles.

We are working towards producing enough energy from offshore wind to power every home in the country by the start of the next decade. That is no mean feat.

This target alone could support up to 60,000 jobs in ports and factories.

Last month we announced £160million of funding for our ports, and we have just announced proposals to help manufacturers benefit as much as possible from renewable energy.

No one should doubt the huge opportunities ahead of us – to level up our country and to clean up our planet.