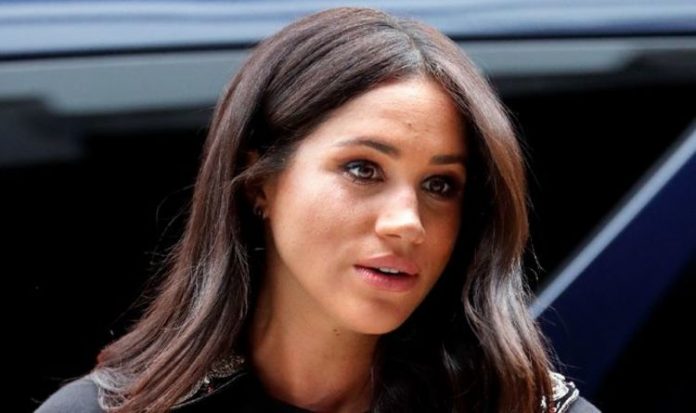 Meghan Markle spoke about the tragic miscarriage of a second child in July as she spoke to the New York Times about the heartbreaking experience. The Duchess highlighted the taboo and shame surrounding the topic and insisted it was time to speak more openly about the difficulties faced by millions everywhere. While speaking on Good Morning Britain with Piers Morgan and Susanna Reid, royal expert Chris Ship explained how Meghan would have found it a lot easier to keep this information private now.

He claimed that it would have been more difficult to keep the miscarriage a secret if she and Prince Harry were still key members of the Royal Family.

Neither Prince Harry or Meghan Markle publicly announced that they were expecting their second child.

Mr Morgan questioned how the Duke and Duchess were able to keep the miscarriage private as it happened months ago.

Mr Ship said: “Prince Harry and Meghan Markle have continued to do certain things but most of the things they have done has been on video calls.

“They have done video calls and facetime and we haven’t seen a great deal of them out in public.

“You will remember the picture that they took on remembrance Sunday when they went to the Los Angeles National Cemetery, some people criticised that.

“We haven’t seen them that much in public so I suppose it is a lot easier to keep something like this private.

“Perhaps much easier than it would have been were they still in the Royal Family.”

“It was simply a very personal article she wrote for the New York Times.”

Writing in the New York Times Meghan detailed the events of the miscarriage: “It was a July morning that began as ordinarily as any other day: Make breakfast. Feed the dogs. Take vitamins. Find that missing sock. Pick up the rogue crayon that rolled under the table. Throw my hair in a ponytail before getting my son from his crib.

“After changing his diaper, I felt a sharp cramp. I dropped to the floor with him in my arms, humming a lullaby to keep us both calm, the cheerful tune a stark contrast to my sense that something was not right.