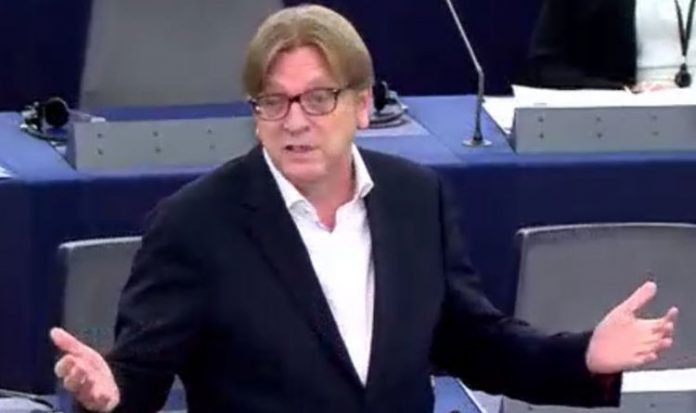 The arch EU federalist joked he hoped today’s World Cup clash between England and Columbia would be less ‘violent’ than the summit at Chequers, the Prime Minister’s countryside retreat.

Mrs May will bring her divided Cabinet together on Friday for a one-day meeting to hammer at the final details of a Brexit White Paper, which will detail her ambitions for a future UK-EU relationship, before its publication next week.

Mr Verhofstadt, addressing MEPs in the EU Parliament’s Strasbourg seat, was keen to focus on the divisions in the UK Government, which he believes is behind the stalling negotiations.

The Belgian MEP joked: “We are waiting for the White Paper from the British Government after the Chequers meeting.

“I hope that the match between England and Columbia is less violent than the meeting at Chequers. But, ok, we will see in the coming days.”

He was speaking at the parliamentary launch of Austria’s EU Council presidency, which during the six-month stint the country’s Chancellor Sebastian Kurz will have to preside over the agreement of the Brexit withdrawal deal.

Britain have been set an October deadline for completing the draft agreement with Brussels in order to give both the British and European parliament’s time to ratify the deal.

However, many EU diplomats believe the lack of information provided by Britain has made a deal far less likely to be achieved by October.

Austrian Chancellor Mr Kurz said: “Of course, we’re unhappy the UK is poised to leave the EU, but more important than that is managing an orderly departure.

“We need sound political and economic relations with the UK.”

Mr Kurz received a tough time from left-wing and liberal MEPs for his stance on the migration challenges faced by the EU, especially from Mr Verhofstadt.

The Belgian accused the bloc’s leaders of spreading fear by using migration as an excuse for the ongoing political argument.

Mr Verhofstadt later tweeted: “We are not living a migration crisis. We are living a political crisis on the back of migrants.

“Look at the figures before believing those who spread fear!”