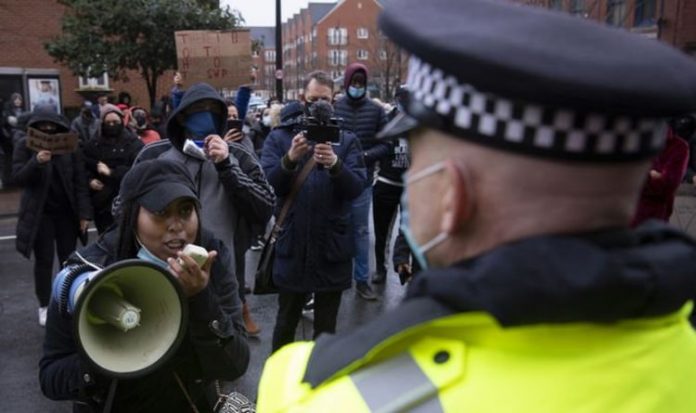 The ComRes poll commissioned by actor and controversial political activist Laurence Fox’s Reclaim Party found 50 percent agreed freedom of speech was threatened while only 29 percent disagreed. The survey of 2,000 people also found 49 percent of people believed they were less free to say what they thought today than five years ago. Only 12 percent disagreed.

Expressing an opinion on racial equality was one of the most nerve-wracking topics, with 43 percent afraid to speak their minds, and only 27 percent unafraid. Similar results were found for immigration, transgender rights and, to a lesser extent, gay rights and the MeToo movement.

Dealing with the police provoked the most anxiety about speaking candidly, with 43 percent afraid to speak their minds and 23 percent unafraid. Encounters in the workplace and with social workers are also situations where people watch what they say.

The survey revealed deep divisions between people depending on age, attitude towards Brexit and political affiliation.

Among the young (18-34), approval of the Black Lives Matter movement is at 51 percent, but among the over-55s it plummets to 27 percent.

Again, there was a generational divide, with 59 percent of young people saying they would, compared to 34 percent of the over-55s.

Mr Fox said: “There is a growing list of examples where restrictions on freedom of speech have caused great problems in society.

“From the establishment response to the Rotherham grooming gangs, to the two-tiered policing of political protests, to the silencing of scientists and academics, to people losing their jobs for holding the wrong views. There are real victims in these stories.”

The findings come after the Sunday Express revealed that Home Secretary Priti Patel is considering demands by Tory backbenchers for hate speech laws to be repealed.

However, in Scotland freedom of speech is set to be curtailed with the SNP led by Nicola Sturgeon wanting to bring in a law to encourage friends and family to report people for having “wrong thoughts” at their dinner table.

North West Leicestershire MP Andrew Bridgen, who is spearheading the campaign to repeal hate speech laws, said: “Freedom of speech is under attack.”