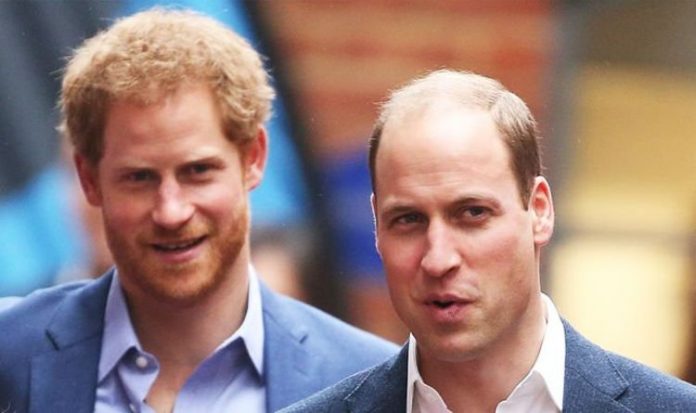 Harry and William’s relationship has reportedly been strained ever since the Sussexes decided to leave the royal frontline and relocate to the US. Although there have been reports that the once-close siblings have been speaking again after months of radio silence, their relationship is not expected to return to how it was before their feud began. The brothers once admitted they were “uniquely bonded” after growing up in the spotlight and the tragic death of their mother Princess Diana when they were both still children.

This “bond” was apparent in their light-hearted relationship which often played out in front of the camera and in their decision to carry out a large portion of their royal work together.

But the two were also on the same wavelength behind closed doors.

In Channel 4’s ‘A Very Royal Christmas: Sandringham Secrets’, commentators explain how the brothers used to kick off the festive season together.

The narrator explained: “Until recently, Harry and William had their own Christmas traditions at Sandringham — their annual kickabout, royals versus staff.”

They would be in different kits on different teams playing with friends and courtiers in an informal match within the royal grounds.

Both are football fans — William is an Aston Villa fan while Harry is an Arsenal fan, which adds to the element of rivalry between them.

Harry and William playing football on Christmas Eve back in 2015 (Image: Getty)

Royal commentator Richard Kay told Channel 4: “Harry and William, when they were teenagers were enormously competitive, you know they didn’t hold back.

“They would chop each other down if they were going for the ball together.”

However, the Sussexes will not be returning to Britain for Christmas this year, presumably due to lockdown restrictions.

Last year the couple also stayed in Canada to celebrate the festive season rather than spending it with the rest of the royals in Sandringham, meaning the Christmas Eve football match was probably cancelled.

Yet, football is not the only sport the brothers have played together — the two royal sons used to play polo with their father Prince Charles.

In a 2006 interview to honour the 30th anniversary of The Prince’s Trust, the three royals explained how “tempers get a bit frayed” when they all play together.

READ MORE: Royal spending row as Queen urged to ‘give money to taxpayers’

Harry and William used to play polo with their father Charles (Image: Getty)

William said: “We work well as a team because we’re all sort of thinking roughly alike — but when you do something wrong, there’s two very stern faces looking at you.

Charles withdrew from the sport in his Sixties, and William joked in the interview: “We decided that the pressure of playing with his two sons was too much, we’re too good for him.”

However, Harry and William continued playing together.

They would compete in a charity polo match every summer organised by the Duke of Cambridge, always on opposite teams.

This year’s match may not have gone ahead due to lockdown restrictions, but it’s not clear if Harry intends to travel across the Atlantic to take part in the sporting event even when the international travel rules subside in the future.

The two brothers played a match together last year, and it did not escape many royal watchers’ notice that they barely glanced at one another.

With hindsight, it was one of the first indications that the feud between them was escalating.

The brothers used to bond over their shared love of sports, even though they were very competitive with one another (Image: Getty)

A few weeks after the match, Harry told ITV when in southern Africa that he and William were now on “different paths” and conceded that they had both “good days and bad days”.

This was the first public acknowledgement of the fallout which sources said had been going on for months, ever since Harry introduced William to his then-girlfriend Meghan Markle.

Harry and William had also been working together since 2009 through the Royal Foundation, a charitable vehicle they set up more than a decade ago.

When Kate, Duchess of Cambridge, married into the Firm she joined the charitable platform, too, as did Meghan upon her wedding in 2018.

However, this seemed to become another area of tension.

In June last year, the Duke and Duchess of Sussex split from their charity partnership with their in-laws allegedly because they had different goals.

The Cambridges were thought to be more constitutionally constrained by their future roles as King and Queen consort than Harry and Meghan.

Yet, a glance back at the only joint interview the four of them did in February 2018 shows how cracks were already appearing.

On a panel for the only Royal Foundation Forum to date, interviewer Tina Daheley asked if the two couples ever had disagreements.

There was an awkward giggle among the royals before William said: “Oh, yes.”

When pressed for more details, Harry said: “I can’t remember, they come so thick and fast.”

Ms Daheley asked if any of the conflicts had been resolved, only for William to answer vaguely: “Is it resolved? We don’t know.”

Harry then explained how they were keen to always make their relationship work.

He said: “We’ve got four different personalities and we’ve got the same passions to make a difference but different opinions.

“Working as a family does have its challenges and the fact that everyone is laughing shows they know exactly what it’s like.

“We’re stuck together for the rest of our lives.”

Harry and Meghan have not seen Kate and William face to face since they were last in the UK, back in March.