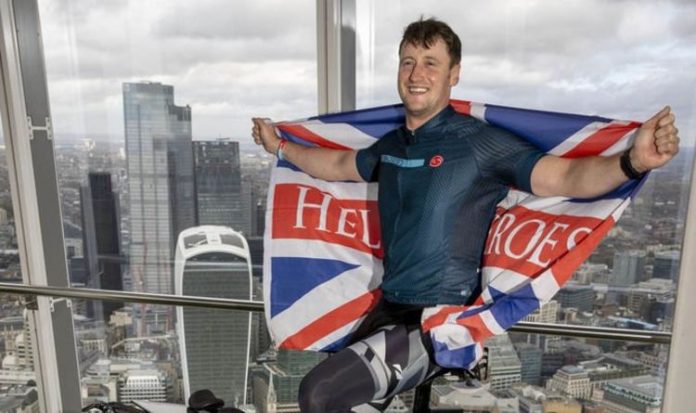 Darren, 35, is pushing mind and body to the limit by completing ten gruelling “Ironman” triathlons over ten consecutive days, in ten different places. His daily routine will begin with a 2.4-mile swim, followed by a 112-mile bike ride, then finish with a marathon run of 26.2 miles. But he hopes the challenge will raise £10,000 for military charity Help for Heroes and shine a light on the mental health problems facing both veterans and civilians.

He told the Daily Express of his mission as he powered through day six on the 72nd floor of London’s iconic skyscraper The Shard on Friday.

The father-of-two said the charity helped him turn his life around after the horrors of active service in war-torn Iraq left him on the brink of suicide.

“After serving 15 years in the Army, I was medically discharged with post traumatic stress disorder and a replaced shoulder.

READ  UK statement ahead of the Presidential Elections in Guinea on 18 October 2020.

“It was the PTSD which was the battle for myself and still is for many other veterans and civilians.

“In 2018, I was ready to end my life. But I have two young daughters and they would have been growing up without their father. They needed me.

“It was Help for Heroes who encouraged me to change my mind and build confidence in myself and I just completely changed my lifestyle.”

The Sandhurst graduate added: “What I’m doing is more important than ever in the times we’re in.

“People are struggling with mental health during the pandemic and Help for Heroes and other charities have lost 40 per cent of their income.

“We have to step up as a country and help our veterans and other people who are struggling.”

Darren had always been fit and worked as an exercise instructor in the Army, but raised his physical and mental fitness for new purpose as he battled depression.

He was selected to represent Team UK in the ex-services’ Warrior Games taking gold and setting a new record in the 100m and 200m sprint.

His 10x10x10 challenge began in his home town of Fleet, Hants, last Sunday, took in Aldershot and other military towns before arriving in central London yesterday.

He began with a swim in the chilly Serpentine, rode a bike fixed on The Shard’s viewing platform, then ran between central London’s military monuments.

His mission is due to end on Tuesday when he burns up his remaining energy in the tenth challenge, at the lastminute.com London Eye.

He will also have completed the highest Ironman triathlon, the first across different locations and scoop the World Record for an endurance event at the Eye.

Each day, Darren has to consume 10,000 calories and, even eating as much high-energy food as he can, struggles to get above 4,000.

“I’ve been throwing it down my neck,” he said. “Yesterday was my birthday, so the guys treated me to Guinness and a KFC as a treat.“

His extraordinary feat follows another Help for Heroes fundraiser this year, when he ran, cycled and paddle boarded from Inverness to Salisbury.

Darren said his wife Gemma and daughters Georgia, three, and Jessica, two have been behind him all the way, despite the hours it takes him away from them.

“They are my biggest supporters and when it’s when I’m in that deep dark place that I think about that.”