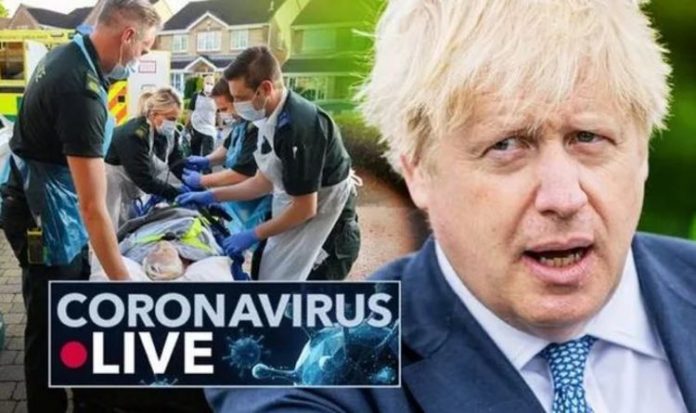 An email sent by an NHS Trust chief to his staff revealed the health service is preparing for a national vaccination programme before Christmas. At the same time, the Government has also introduced new legislation to allow the UK to bypass Brussels laws on approving vaccines if a jab is ready before the end of the Brexit transition period on December 31.

Glen Burley, chief executive of George Eliot Hospital NHS Trust in Warwickshire, wrote in an internal memo to staff: “Our Trust, alongside NHS organisations nationally, has been told to be prepared to start a Covid-19 staff vaccine programme in early December.

“The latest intelligence states a coronavirus vaccine should be available this year with NHS staff prioritised prior to Christmas.”

The news comes despite the Government’s chief scientific adviser saying a roll-out of a vaccine for COVID-19 is unlikely to take place before Spring 2021.

Sir Patrick Vallance said while there has been “remarkable” progress made around the world, vaccines will not be in widespread use until some time next year.

Speaking at a Downing Street press briefing, he said it was too early to speculate about how effective a vaccine might be, but said the aim would be for a vaccine to allow the “release” of measures such as social distancing and mask-wearing.

At the same time, contacts of people infected with coronavirus may have to self-isolate for as little as seven days amid concerns in Whitehall about the levels of public compliance with the Test and Trace system.

Officials on the Government’s COVID-19 taskforce are understood to be examining the case for reducing the current fortnight period of isolation to between 10 days and a week.

The move – which would not apply to those who test positive for the disease – comes amid growing dissatisfaction with the performance of the system from ministers and MPs.

Boris Johnson was said to have become “disillusioned” with statistics provided by the service after they proved to be wrong.

10:45am update: “No question” UK experiencing second wave of coronavirus

There is “no question” that the UK is experiencing a second wave of COVID-19 cases, the UK’s national statistician has said.

Professor Sir Ian Diamond, from the Office for National Statistics (ONS), told the BBC’s Andrew Marr show: “I think there is no question we are in a second wave. We are seeing infections rise very quickly.”

He said that in England about one in 130 people have the virus, with estimates for Scotland and Wales being “a little lower” and in Northern Ireland “a little higher”.

Asked if recent data suggesting a slowing growth in cases meant the country would leave a second wave earlier than previously expected, he said: “I’d very much like to hope so. However, I am extremely nervous about taking just initial data and pushing things forward, and say ‘it’s fine’.

“Because, let’s be clear, we might see the rate of increase slow a little as we get further data over the next few weeks, but we’re still at a relatively high level. What we really need to do is to bring that level down.

“Even if we were to get R in the north to around about one, it would continue to have infections at a high rate.

“I really do think it’s too early to say on slowing down.”

Wales’s Health Minister Vaughan Gething said the Welsh Government had “worked with supermarkets” and discussed which items are covered by the ban on non-essential retail.

“We’ll talk to them again on Monday so everyone understands the position we’re in to have some clarity,” Mr Gething told BBC’s The Andrew Marr Show.

He said the ban was in place to ensure fairness to businesses that are closed during the 17-day lockdown and reduce the opportunities for people to “go out and mix”.

9:15am update: Sunak vows to lift the lid on economic havoc of circuit breaker

Rishi Sunak has told civil servants to compile data to illustrate the damage another lockdown would have on the UK’s economy to be published alongside daily coronavirus figures.

READ  No deal Brexit: What does no deal Brexit mean for house prices? Should you remortgage now? | Politics | News - UK

The move was welcomed by several Tory politicians, with Sir Bernard Jenkin suggesting it would lead to a “better understanding” of what was at stake.

The Treasury’s own economic modelling is only available to ministers as it stands – by the Chancellor wants it to be more widely circulated to underline the threat restrictions pose.

Mr Sunak has told Treasury officials to consider how best to use economic data to “contextualise” death and infection figures.

8:30am update: Doctors say Tier system will not impact on coronavirus spread

More than a third of doctors in England feel the Government’s tiering system will have no impact on efforts to contain the spread of Coronavirus, a wide-ranging survey has suggested.

The research, from the British Medical Association (BMA), also raises concerns about the confidence of healthcare staff for the autumn/winter period, with more than half saying they are “quite anxious” about it.

Almost two thirds (65 percent) said staffing shortages are a concern in the months ahead, while 60 percent said they are concerned about their personal health and wellbeing.