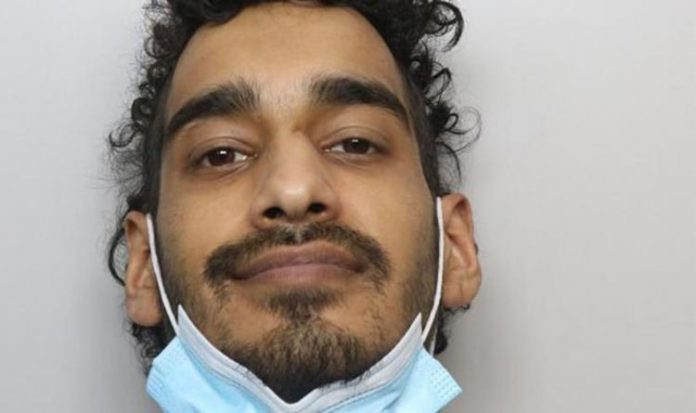 A judge said the homeowner was protecting her property and feared career criminal Rehan Malik would seize the weapon and use it on her. The 23-year-old thief from Bradford severed nerves in his hands attempting to grab the sword and may never recover mobility. On remand, he relied on a cellmate to be his “carer” as he cannot perform basic bodily functions alone.

But judge Jonathan Rose said Malik’s victim was “blameless” for the injuries he suffered.

Malik was one of three masked raiders who smashed their way into a property in Shipley,WestYorks, in the early hours of October 25.

The woman owner’s partner grabbed the decorative weapon after being confronted by a masked man demanding keys to their Audi S3 car.

But when the trio attempted to drive off they got stuck in the garage’s mechanical doors.

Bradford Crown Court heard that the couple tried to stop the vehicle being driven off. In the stand-off the woman pointed the sword at rear-seat passenger Malik.

Clare Walsh, prosecuting, said Malik grabbed the sword and attempted to pull it away, slashing his hands in the process and leaving his blood in the vehicle.

The gang fled in a getaway car and Malik was taken almost 40 miles to Barnsley to get treatment to avoid detection.

Police checked up on hospitals in the region and discovered Malik’s whereabouts.

He spent five days in hospital and would have died from blood loss without receiving transfusions.

Defence barrister Shufqat Khan said the “life-threatening and lifechanging injury” had led Malik to decide to change his crooked ways.

He was jailed for three years eight months after also admitting dangerous driving, driving while disqualified and without insurance.

Judge Jonathan Rose told him: “You have no one at all to blame for the injuries to your hands other than yourself.”