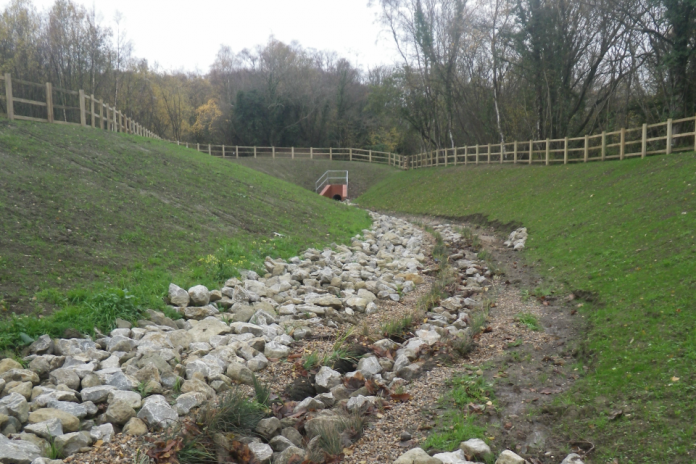 One hundred metres of the Bourne Stream south of Borough Green is set to flow freely once more after being released from its underground pipe, thanks to the Environment Agency and construction firm A B Canham and Son.

The newly open stretch of the watercourse, also known as the Basted Stream, will now be able to support more plant and animal life as well as reducing the risk of flooding to the nearby area. A footpath has also been created to run alongside it, giving greater access to the natural environment, so that people will be able to enjoy the stream while walking to or from Basted.

The work to release the stream, termed ‘daylighting’, was carried out as part of the Milbourne Place housing development.

Freeing up this stretch of a previously covered-up stream demonstrates how the Environment Agency is helping the drive to build back better and greener. The project also is a step towards reaching targets in the EA2025: creating a better place plan including improving more than 4,000 kilometres of river and creating nearly 1,200 hectares of habitat.

In achieving this, there was a concerted effort across several of our teams to make AB Canham and Son aware of what might be possible in opening up the stream. Working together we were able to help improve the environment by uncovering over half of this buried stretch of watercourse.

Opening the stream will help improve the area for wildlife as plants will now grow and provide food and shelter for fish and other animals.

Although it’s dry at the moment, the stream will start to flow as groundwater levels rise following rainfall over the winter months. It will then start to fill with flora and fauna and help make the Bourne catchment healthier and more resilient.

The initial reason for replacing the culvert with a larger one and opening up part of the channel was to reduce flood risk so that the site could be developed for housing.

The flood risk modelling in support of the planning application demonstrated a reduction in flood risk to the site itself and the immediate vicinity around the medical centre and access roads.

As more rain falls during the winter, groundwater levels start to rise. Generally, rivers with ‘bourne’ in the name will start to flow in the spring. For example, Winterbourne, Lambourne, Nailbourne. In some years exceptional rainfall can lead to groundwater flooding.

READ  Will the Queen be vaccinated against Covid-19? | Royal | News (Reports)

Groundwater levels are recharging now and there is a delay of months as the rain filters down into the aquifers.

Flooding from groundwater can happen when the level of water within the rock or soil that makes up the land surface (known as the water table) rises.

Lead local flood authorities (the unitary or county council) are responsible for managing the risk of flooding from groundwater.