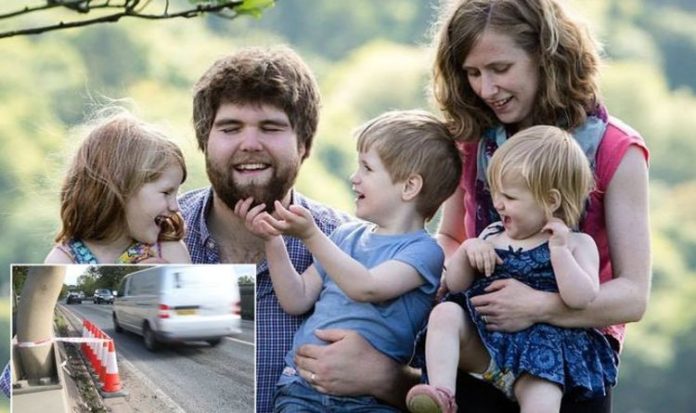 Zoe Powell, 29, Phoebe, eight, Simeon, six, and Amelia, four, died after the family’s people carrier collided with a lorry on the A40 in Oxfordshire on Monday night. The youngest child and father Joshua, 30, were critically injured and rushed to John Radcliffe Hospital in Oxford.

One witness told how the Subaru, had “crumpled like a can”, while another driver described the aftermath as a “scene from hell”.

The crash came just months after the family had to flee their home in Chinnor after a fire.

David Patchett, who lives on a narrow boat near the crash, said: “The car was in the middle of the road, it looked like it had been crumpled like a can.

“The emergency services turned up very quickly. My first thoughts were nobody had survived, that’s how bad it was.

“While I was calling police, the man regained consciousness and that’s when I started screaming ‘Get someone here now’.”

Another motorist wrote on Facebook: “I’ve never seen anything so traumatising in my life. I would never want anyone to see that. I never thought I’d see something like that.”

The driver of the truck, a 56-yearold man, suffered minor injuries.

Mrs Powell was a churchgoer and parenting writer who moved to the area with her family from Sheffield in 2014.

She ran a company producing journals for new mothers and edited a successful blog.

Zoe had her first child with her “best friend” Joshua while studying for an English literature degree.

She had a “deep love for books, stationery and florals”. The couple married as teenagers.

Mr Patchett is a director of a construction company Skylark and Hare. In an interview the motherof-four spoke of her love of teaching bible studies with her husband to teenagers at their church.

A neighbour said: “They were a lovely family. They were renting somewhere else in Chinnor because there was a fire, as you can see the house is boarded up. It is a devastating shame.”

Yesterday a cross was erected outside Chinnor Community Church in memory of the family who visited weekly.

Bouquets were scattered there alongside loving tributes.

Chinnor Parish Council said: “As a close community, we are all so saddened and shocked to hear about the tragic accident last night.”

A member of the parish said: “At the moment it’s just so raw. The community are very upset.”