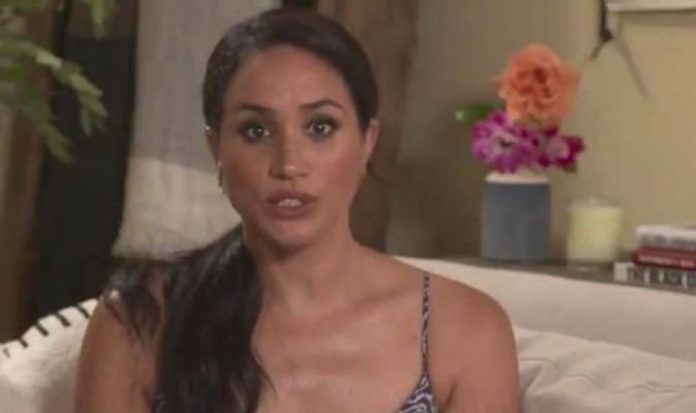 Meghan took part in Fortune’s members-only Most Powerful Women Next Gen Summit last night to discuss leadership and social media. However, during the 15-minute virtual panel, the Duchess of Sussex also appeared to briefly refer to the decision she and Prince Harry took in January, when they announced their intention to step back as senior royals, despite the Duke being sixth-in-line to the throne.

Meghan, seemingly speaking about her family’s decision to start a new life in California, said “sometimes making the best decision for you and your family might not be the popular one”.

This thinly-veiled reference to the Royal Family and Megxit was criticised by a few social media users, who believed the Duchess should have focused on the topics of the panel.

Royal watcher Kayla said: “The event was around leadership no?

“Why not talk about other things she’s done aside from leaving the Royal Family?

Meghan Markle said she has chosen not to have a personal social media account (Image: GETTY)

“Surely she has other things to talk about, strange.

“Agree on her message about social media though, her fans could learn something from her”.

“What’s wrong with her? Sis you left, good for you.

READ MORE: Prince Harry could RETURN to the UK ‘within weeks’ for meeting

Meghan Markle shut down her social media accounts in January 2018, after announcing her engagement to Prince Harry (Image: GETTY)

“Look at the future, what’s gone is gone.

“Start thriving like the whole Royal Family is thriving since January.

“She is really obsessed with her royalty days”.

Another social media user, Lilybet65, accused Meghan of being “full of contradictions”.

They said: “Omg! she is just full of contradictions!! Left the institution to save my family but I love my institutional titles which I quote at the drop of the hat…

“I am free but yet I have not moved on, I am thriving but I can’t let go of the past, I am not on social media but here I am”.

Another royal fan account joked: “I quit royal life but please refer to me as your Royal Highness…”

As agreed during the Sandringham Summit, the Duke and Duchess of Sussex can continue to use their titles but can no longer be addressed as His/Her Royal Highness or add the prefix HRH in front of their names.

Speaking from her home in Montecito, Santa Barbara, Meghan also openly referred to the Royal Family when discussing her use of social media.

Comparing social media to drugs, the Duchess said: “I have for my own self-preservation not been on social media for a very long time.

“I had a personal account years ago which I closed down.

“Then we had one through the institution in our office in the UK.

“That wasn’t managed by us, that was a whole team.

“That comes with the territory for the job, I have made a personal choice to not have any account so I don’t know what’s out there and for many ways that’s helpful for me.

“I have a lot of concerns for people that have become obsessed with it and so much a part of our daily culture for so many people that it’s an addiction, like many others very things in this world.

“And there is something in there algorithmically creating this obsession that I think is very unhealthy for people.”

Meghan has been an active social media user until January 2018, when she closed down both her Twitter and Instagram accounts.

Confirming this move at the time, Kensington Palace said she hadn’t used her accounts “for some time”.