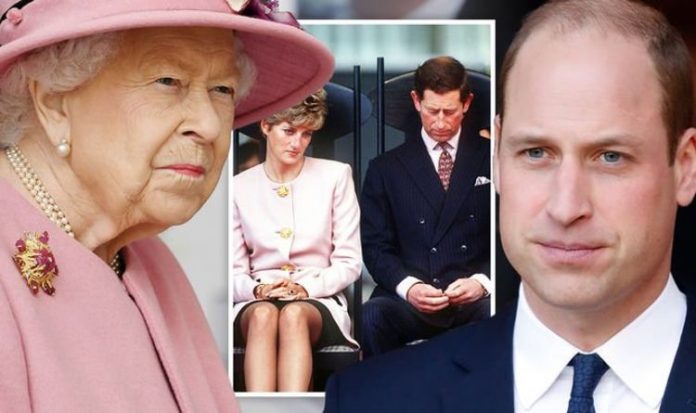 But when her son Prince Charles separated from Princess Diana, the Queen was on hand to counsel her heir through the difficult period, royal biographer Robert Lacey claims. Prince Charles and Princess Diana married in 1981, in one of the most-watched royal weddings ever.

As is well known, the union did not last, and they separated in the early 90s, finalizing their divorce in 1996.

Parents divorcing is easy for no child – and Prince William wasn’t an exception to this.

However, according to royal biographer Richard Lacey, the Queen managed to spot William’s suffering before anyone else.

In the new Battle of Brothers biography, Lacey writes: “It was then three years after his parents’ separation – just two years before Diana’s death – and the Queen was worried about William’s state of mind.

“The Queen actually feared that the boy might be heading for some sort of breakdown, she confided to one of her advisors – just as the prince’s mother herself had clearly cracked up mentally in several respects.”

He claims that Prince Philip also shared his concerns about his grandson, and suggested the Queen step in to help young William.

The Queen responding by spending more time with her grandson and heir, with Lacey claiming she implemented a routine of seeing William every Sunday for lunch.

Apparently, this “helped to turn the fragile schoolboy heading for a breakdown into quite a tough young man.”

He also revealed becoming a father brought back feelings and traumas he experienced when he suddenly lost his mother in 1997.

He said: “Having children is the biggest life-changing moment, it really is.
“I think when you’ve been through something traumatic in life – your emotions come back in leaps and bounds because it’s a very different phase of life.

“And there’s no one there to, kind of, help you, and I definitely found it very, at times, overwhelming.”

The Duke and Duchess of Cambridge have been extremely active in promoting good emotional wellbeing with a series of charitable endeavours over the years.

A mission statement on the website reads: “Mental health matters just as much as our physical health, yet too often it is ignored, misunderstood and neglected.

READ  Brexit news: May vows to deliver the will of the people and END free movement | Politics | News - UK

The Duke and Duchess of Cambridge spearhead the Heads Together initiative, which combines a campaign to tackle stigma and change the conversation on mental health with fundraising for a series of innovative new mental health services.

The Royal Foundation works with leading charity Mind on a variety of initiatives, including mental health in sport, work, and for children.

“It is one of the biggest public health issues of today, impacting all aspects of society.

“It is simply wrong that 330,000 people in Britain lose their jobs each year due to mental health, or that one in 10 children has a diagnosable condition.”