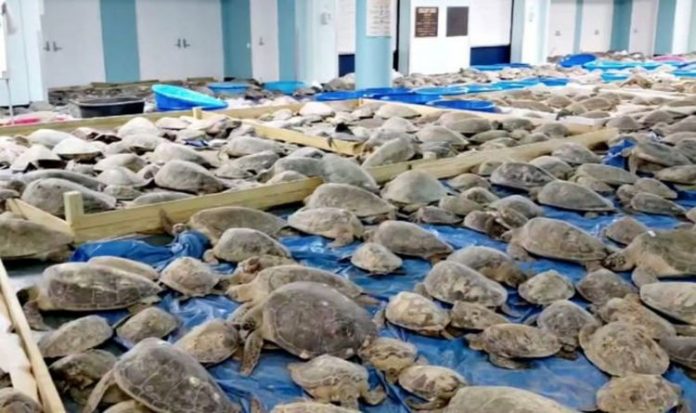 A huge storm sweeping the southern US has killed at least 21 people and left millions without power. A state of emergency was approved in Texas by US President Joe Biden.

Freezing temperatures have caused water pipes to burst and the state’s energy grid was overwhelmed as people tried to keep warm.

Earlier this week temperatures dropped as low as -18C – the coldest in more than 30 years.

Turtles stunned by the extreme cold weather were placed in an evacuation centre in South Padre Island, Texas.

Thomas Black posted an extraordinary photo to Twitter of icicles hanging from a ceiling fan in his apartment building in Upper Dallas.

He wrote: “This is how cold it is at my Apartment.

“As a Texan, yes, I’m certainly not built for this”

The tweet has been retweeted 42.3k times and received 313.4k likes.

He also witnessed the surreal sight of his pool freezing.

He wrote: “We aren’t used to super cold temperatures.

According to the National Weather Service, the worst of the storm had moved through Texas. But 100 million Americans remain under a weather warning.

Historically low temperatures are expected to remain for several days with more than 71% of the US covered by snow.