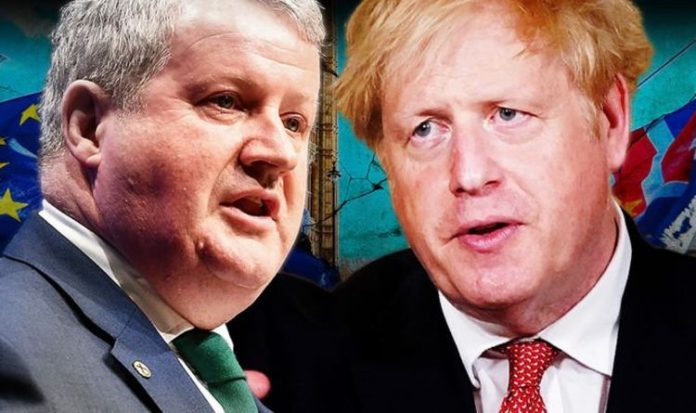 THE SNP, led by Nicola Sturgeon, are pushing for a second Scottish independence referendum ‒ but their attempts have so far been rebuffed by the Government. Support for breaking up the UK has enjoyed a sustained boost in Scotland recently. A survey by pollsters Ipsos MORI found that 58 percent of those who said they were likely to vote in an independence referendum would vote Yes while 42 percent would opt for No. In the months following the 2019 general election, Holyrood and Westminster have been at odds as the SNP try to secure powers to hold a second independence vote. Without legislation passing through Westminster, another option for the SNP was a section 30 order – which allows Holyrood to pass laws in areas that are normally reserved to Westminster.

READ  A vaccine delivery plan for everyone

But disputes over Scotland’s powers turned hostile when Mr Blackford clashed with the Prime Minister.

In July, the SNP’s leader in Westminster accused the Government of having a “hostile agenda against devolution”.

Mr Blackford hit out at the Conservatives’ proposals to bring forward legislation for state aid laws to remain a reserved power of the Westminster Government after Brexit, despite SNP calls for it to be devolved.

During PMQs, Mr Blackford said: “This Tory Government will publish legislation for its biggest power grab since the Scottish people voted overwhelmingly for the Scottish Parliament in 1997.

“Westminster’s plan to impose an unelected, unaccountable body to rule on decisions made by the Scottish Parliament will not be accepted.

Responding, Mr Johnson said: “On the contrary, what we are doing is possibly the biggest single act of devolution to Scotland, to Wales, to Northern Ireland, in modern memory and he should be celebrating the 70 powers or more that are going to be transferred to the elected people in Scotland.

Mr Blackford is still furious with the Government over Brexit – this week, he warned a no deal exit from the EU will “chuck communities under the bus”.

He said: “We really should recoil at the possibility of a no deal Brexit when we’re going through a health pandemic, when there are significant risks to our economy, where people are losing their jobs.

“This is just putting misery on misery and quite frankly the Government has got to come to its senses.”

Last week, Mr Johnson told the UK to prepare for a no deal Brexit.