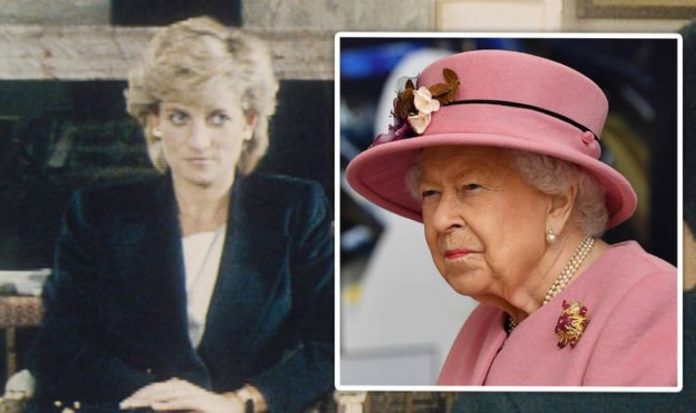 The Queen ordered Prince Charles and Princess Diana to file a divorce in the wake of her infamous candid interview with Martin Bashir in 1995, royal expert Phil Dampier said. He told the Daily Telegraph: “Panorama was the watershed moment when the Queen finally decided enough is enough.”

The Queen, the expert added, was horrified by the confessions made by her daughter-in-law on prime time television, calling the whole interview a “frightful thing”.

Diana and Charles had been separated since 1992 but had yet to officially split by the time the interview with Mr Bashir aired.

During the interview with Panorama, Princess Diana questioned Prince Charles’s credential to be one day the King of the country.

Diana also accused the then-Camilla Parker Bowles of being among the main reasons her marriage with Charles had ended so quickly.

Speaking to Mr Bashir 25 years ago, the Princess of Wales famously addressed Prince Charles and Camilla’s affair saying: “Well, there were three of us in this marriage, so it was a bit crowded.”

The Princess even confessed her desire to see Prince William succeed the Queen rather than seeing the Prince of Wales on the throne.

READ MORE: Diana fury: Royal used BBC interview to ‘get own back’ on Charles

Asked whether she wished her firstborn to become monarch rather than her husband, Diana replied: “My wish is that my husband finds peace of mind, and from that follows others things, yes.”

Following this interview, filmed in secret on November 5 more than two decades ago and released the following week by the BBC, the Princess of Wales’ life changed forever.

Princess Diana found herself more isolated, according to Mr Dampier.

He said: “Diana then became increasingly isolated and started to fall out with the people closest to her.

“She fell out with her mother, her brother, Fergie and other close friends – seemingly convinced she was being spied on.

“Her former butler Paul Burrell described how she made him rip up the floorboards at Kensington Palace looking for bugs.

“Because she died as this iconic young woman, people tend to put her on a pedestal but actually in the run up to the Paris car crash she was an unguided missile.”

The Princess of Wales eventually divorced from Prince Charles the following year, in 1996.

Being truth to the desire she expressed during her Panorama interview of desiring to become the “Queen’s of people’s hearts”, Diana continued to work on charitable causes close to her heart.

In 1997 she became the most famous advocate for the international ban of landmines.

Only a few months before dying in a car crash in Paris, the royal brought world leaders’ attention on the issue by walking through a minefield in Angola.

The 25th anniversary of Diana’s interview is being marked by a Channel 4 documentary airing tonight – Diana: The Truth Behind the Interview.