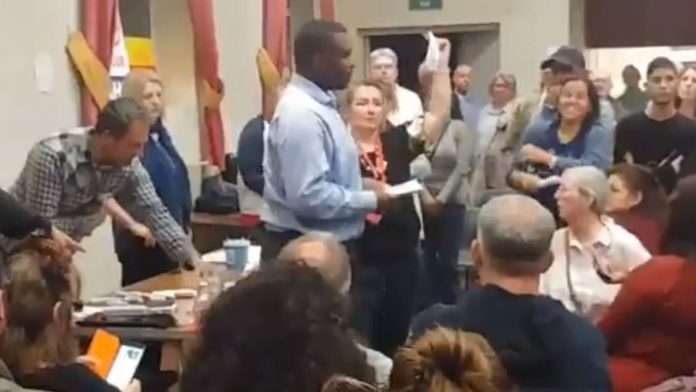 Labour party bosses are scrambling to uncover how Iranian state television was able to broadcast from a vote of no confidence in an MP who chairs its pro-Israel group.

An investigation has been launched after footage emerged on Press TV’s UK Twitter account of an emergency meeting held on the future of Joan Ryan, Enfield North MP and head of Labour Friends of Israel.

Pictures and videos posted from the Iranian state broadcaster showed crowds whooping and cheering as Ms Ryan narrowly lost the vote of no confidence by 94 votes to 92.

It reported on “minor disputes” and “small spats”, describing Ms Ryan as an “anti-Corbyn rebel” who was “trying to defend herself to members”.

Labour deputy leader Tom Watson said it was “impossible to fathom” how the broadcaster was able to release clips from inside the meeting.

“This disorder makes a farce of the proceedings and is not how the modern Labour Party should conduct its affairs,” he said.

Chair of the local Enfield North party, Siddo Dwyer, called it “totally unacceptable” and vowed to complain to Press TV.

He suggested the identity of the Press TV employee was known, saying they had been given a “direct warning”.

“It didn’t occur to any of us at the time that they were from a state broadcaster,” Mr Dwyer added.

:: Labour may not be ‘taken back’ from left, Blair admits

Roshan Salih, who describes himself as a journalist for Press TV on Twitter, said “no announcement was made that filming was prohibited”.

“Footage we got was openly filmed and no-one tried to stop filming – so we just did our jobs,” he wrote. “Perhaps Labour Enfield need to answer some questions if filming wasn’t allowed.”

In a separate message, he wrote: “So it seems that the media has decided that Joan Ryan MP losing a no confidence vote last night is NOT the story.

“The real story, of course, is that Press TV filmed it. Perhaps the British media should have done their jobs and reported the story.”

#JoanRyan & Israel fans are complaining that the Iranian station Press TV scooped everyone else to cover her defeat. This is to be expected from the Israel lobby. It also shows the lamentable failure of the U.K. media to cover events of public interest #weareEnfieldNorth

Ms Ryan, who has represented Enfield North since 1997, said she “fought the hard left to a virtual draw” in the vote of no confidence.

She added: “I did so in the face of a well organised, secret and long-planned divisive campaign led by party-within-a-party Momentum.

“This was about antisemitism in the Labour party and those of us who have stood by the Jewish community and said ‘enough is enough’.

He said: “It’s not part of any formal procedure, so it changes nothing about my role as Labour MP for Luton South.

“I’m really sorry a handful of people in the Labour Party want to overturn your vote of confidence in me last year.

“Their actions say far less about me – and you – than they do about the face of today’s Labour Party.

“I’ve not changed, but the Labour Party has.”

Ms Ryan won 58% of the vote in Enfield North at the general election last year – with the highest number of votes achieved by a Labour candidate since the seat was created.

Mr Shuker won 62% of the vote last year, with the same record.

A London Labour Party spokesperson told Sky News: “Filming of local Labour Party meetings is not permitted, and Enfield North will be reminded of this fact.