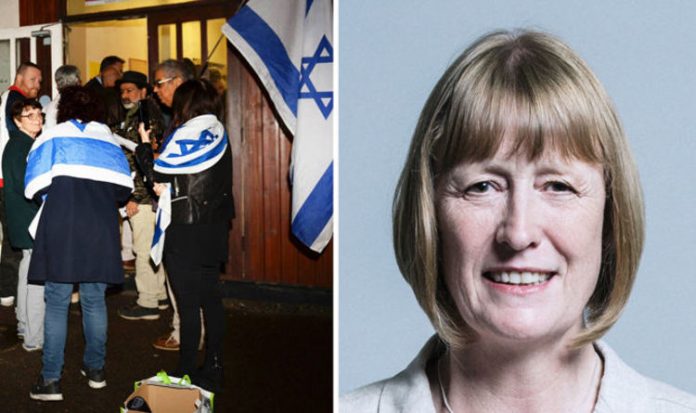 The former minister and the chairwoman of Labour Friends of Israel has been an outspoken critic of Jeremy Corbyn’s handling of the anti-Semitism row. And in a purge last night party members voted to deselect her as well as Labour MP Gavin Shuker.

The Press TV footage was filmed from inside the Enfield meeting and called Ms Ryan a “pro-Israel MP”.

The chair of the Enfield North Labour Party said an investigation would be taking place following the broadcast.

Labour Party’s deputy leader, Tom Watson, said: “Impossible to fathom how Iran State TV was able to live-tweet the Joan Ryan no confidence vote at Enfield North – from inside the CLP meeting.

“This disorder makes a farce of the proceedings and is not how the modern Labour Party should conduct its affairs.”

The channel had its licence to broadcast in the UK taken away by the media regulator Ofcom in 2012 as editorial decisions were being made in Tehran.

Ms Ryan tweeted after the vote on Thursday, September 6: “I will be out tomorrow morning working hard for the people of Enfield.

“Just to be clear I will not be resigning. I am Labour through and through and I will continue to stand up and fight for Labour values.”

Earlier she tweeted: “So lost 92 to 94 votes hardly decisive victory and it never occurred to me that Trots Stalinists Communists and assorted hard left would gave confidence in me. I have none in them.”

Dozens of activists attended the Enfield meeting to hear the outcome of the vote and many cheered when the results came through.

The moment was recorded on Press TV, the Iranian state propaganda channel.

Mr Shuker tweeted: “At a local Labour Party meeting last night a motion of no confidence in me was passed.

“It’s not part of any formal procedure, so it changes nothing about my role as Labour MP for Luton South.”

Although the vote of no confidence carries no official force, it raises the possibility of a trigger ballot where activists could vote for a selection process to pick a new candidate.

Shadow Chancellor of the Labour Party John McDonnell has warned against threats of deselection and said that fighting against anti-Semitism “cannot be grounds for desolation”.

Mr McDonnell added: “These people are speaking out on anti-Semitism and are doing it with the best of hearts. They’ve got to be supported.”

Ms Ryan was first elected MP for Enfield North in 1997 and has been a member of the Labour Party for 34 years.

The votes of no confidence one as the former Prime Minister Tony Blair has said that the party is unrecognisable under Jeremy Corbyn.

The ex-PM said to the BBC: “I’ve been a member of the Labour Party for over 40 years.

“You do feel a strong loyalty and attachment, but at the same time it’s a different party. The question is, can it be taken back?’

“This is a different type of Labour Party. Can it be taken back? I don’t know.”