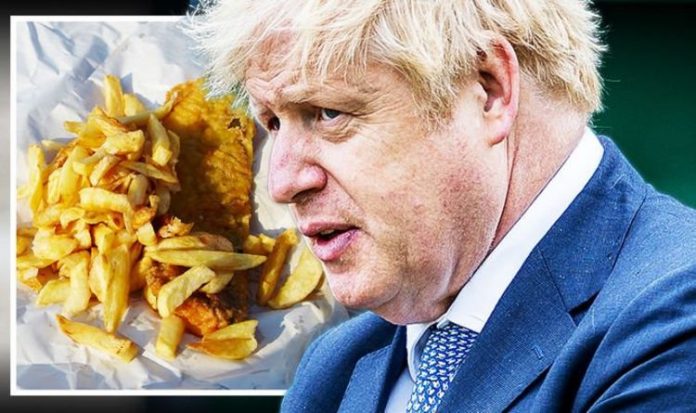 Mr Johnson and Mrs von der Leyen were served pumpkin soup and scallops to start, followed by a main course of steamed turbot, mashed potatoes with wasabi and vegetables.

The starter might have also invoked memories of the “scallop wars” in 2018, when British and French fishing fleets clashed in a dispute about access to fishing grounds in the Baie de Seine.

As the talks continue in Brussels this week, it appears the Italians and the British have also had a few squabbles over fish.

In 2015, civic chiefs in Rome added fish and chips, a long-considered British creation, to school menus as part of moves to reflect the culinary heritage of other EU nations.

However, in the description offered to students, Italian council bosses claimed the British delicacy might have in fact originated in Italy.

They referred to the novel Oliver Twist by Charles Dickens and suggested immigrants from Venice may have introduced the meal to the British Isles.

Fish and chips was chosen as the dish to represent Britain on the “EU menu” and proved to be one of the most popular items.

Other dishes were Belgian speciality beer-braised chicken as well as the likes of goulash, croque-monsieur, wiener schnitzel and hot dogs.

Andrew Crook, treasurer of the National Federation of Fish Friers, told The Telegraph he had “never heard anything about the Italians bringing over fish and chips”.

“Like all school meals served in Rome, these are prepared under the guidance of dietitians and are served alongside vegetables and fruit.”

Paolo Masini, also a schools councillor at Rome city hall, admitted that schools had returned pasta to school menus in response to complaints from parents.