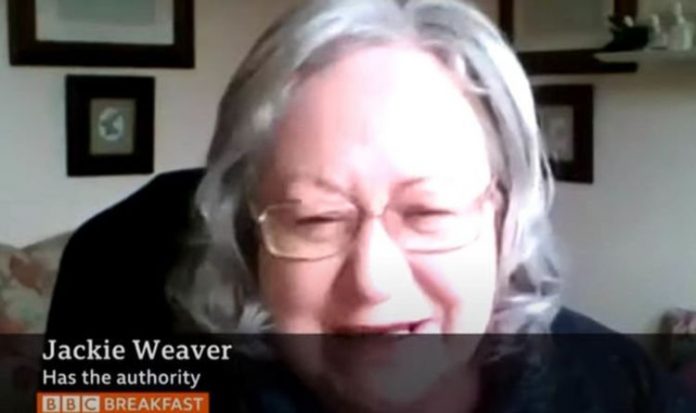 The town council meeting which descended into chaos, with councillors trading insults and ultimately getting booted off the Zoom call, was shared thousands of times. The name of one of the meeting’s participants, Jackie Weaver, became the fourth trending item on Thursday evening. BBC Breakfast has since come out in support of Ms Weaver as her tagline on BBC Breakfast said “Jackie Weaver has the authority”.

Ms Weaver told BBC Breakfast about the authority comments, she said: “I was grateful to one of my clerk colleagues who said he was getting his own t-shirt which has a reverse bit on the back saying “yes, I have!”

The meeting on December 10 was the second time chair Brian Tolver had been removed, having previously been evicted from the earlier 7pm Planning and Environment Committee.

The 7.30pm extraordinary meeting began with an unseen councillor mumbling “f*** off” under their breath.

Mr Tolver refused to recognise the legitimacy of both meetings.

He told meeting clerk Jackie Weaver, from the Cheshire Association of Local Councils, to “stop talking” and “you have no authority here”.

In response, Ms Weaver removed Mr Tolver from the Zoom call and placed him in a virtual waiting room.

Mr Tolver told the PA news agency: “I cannot think of any other council meeting anywhere, that was taken over by an unqualified member of the public like this.

“Removing half the councillors from the meeting denied half of the voters of the village from being represented – it was an appalling attack on their democratic rights.

Ms Weaver said she had had “nothing but really lovely, positive support” since the clip had gone viral.

She said that it was important to try to eradicate “bad behaviour” from local councils.

She added: “A lot of us are working very hard – and that includes central government – to try to do something about that, because we’re passionate about the fact that local government is the mechanism by which people can really engage with their communities.”