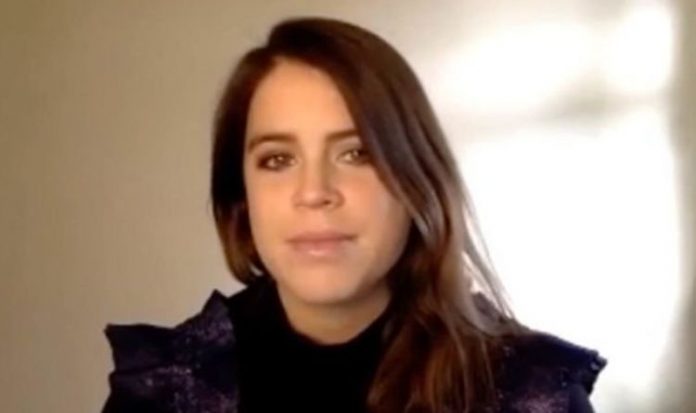 Princess Eugenie joined her friend Julia de Boinville in a brief clip filmed for the organisation they co-founded, The Anti-Slavery Collective. The youngest daughter of Prince Andrew and Sarah Ferguson looked radiant and smartly dressed in a black high-neck jumper with exaggerated sleeves.

The brief video was released to mark the anniversary of the Morecambe Bay cockling disaster, during which an incoming tide claimed the lives of 21 Chinese undocumented immigrants who were picking cockles off the Lancashire coast.

In the clip, Julia and Eugenie took turns to speak about the horrific incident.

Starting, Julia explained to their audience they wanted to put the spotlight on the tragedy, saying: “Good morning everyone, today is the anniversary of the Morecambe Bay cockling disaster, so we wanted to take a moment with you to remember them on this important anniversary.”

Joining in, Eugenie said: “17 years ago, 21 Chinese undocumented immigrant labourers were drowned by an incoming tide after picking cockles off the Lancashire coast.”

Julia continued: “They were all working illegally, picking cockles for hours on end to send money back to their families, while their gangmasters took all of their profits.”

Eugenie added: “While their story is so tragic, it really isn’t very unique and it’s something that happens in modern slavery and has only worsened in the last years.

“There’s an estimated 24.9 million victims of forced labour globally across the world.”

Julia ended the video saying: “Please join us in remembering them today.”

The Anti-Slavery Collective aims at raising awareness on modern slavery and encouraging people to fight human trafficking through ideas shared by policy-makers, experts and survivors within the organisation.

Princess Eugenie’s due date is believed to be close as she and her husband Jack Brooksbank announced in September last year their baby was expected in early 2021.

The message was accompanied by a picture in which the couple smiled to the camera and another showing Jack and Eugenie’s hands holding a pair of teddy bear slippers for newborns.

Buckingham Palace confirmed Eugenie’s pregnancy saying in a statement: “Her Royal Highness Princess Eugenie and Mr Jack Brooksbank are very pleased to announce that they are expecting a baby in early 2021.

As the sex of the baby is not yet known, punters are betting on both male and female names.

In January, betting company Betfair placed odds of 8/1 for the names Alice and Arthur.

Names such as Augusta, Thomas and Alexandra were placed at 14/1, while chances to name the royal baby after Prince Charles are at 22/1.

As Eugenie prepares to become a mum, Sarah Ferguson spoke with anticipation about welcoming her first grandchild and how she thinks her daughter will behave with the newborn.

She told Us Weekly: “Having not had my own mother around, I’ve always been determined to be a very present mother with my children, and I know Eugenie will be the same with hers.

“She is incredibly empathetic and will be a great mother.

“She is a very strong and determined person, always looking for the truth in all she does.”