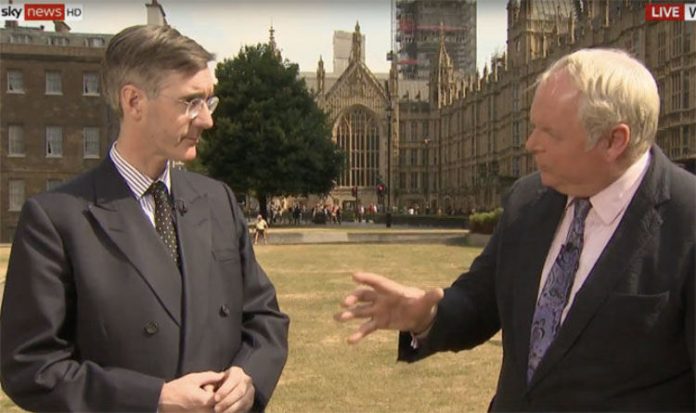 “The Prime Minister is inconsistent with her promises and that is a bad position. I believe we should do what we promised to do.”

The position of Mr Rees-Mogg, an incredibly influential MP and the leader of the backbench Eurosceptic European Research Group, has hardened considerably since the now infamous Chequers White Paper meeting on Friday.

The compromises outlined by Mrs May were considered so unacceptable by Britain’s Brexit minister David Davis that he resigned last night.

Mr Rees-Mogg made a point about Mrs May’s “Brexit means Brexit” position on Britain’s exit from the European Union and the apparent compromises which formed the basis of the Brexit white paper announced at Chequers on Friday.

He said: “Are we going to leave the EU or not? Chequers is not really leaving the EU.

“She’s advanced not to have Brexit – that is what this document is saying.”

Mr Davis’s late-night resignation plunged Mrs May into a fresh leadership crisis and he was swiftly followed out of the Department for Exiting the EU by ally Steve Baker.

But Mr Davis said a leadership challenge would be the “wrong thing to do” and insisted he believed Mrs May was a “good prime minister”.

Asked if she could survive, he replied: “Oh yes, of course.”

When asked if he thought there should be a vote or confidence in Mrs May, he said: “I’m more concerned about policy than personnel.”

Mr Rees-Mogg added he would vote against the White Paper as it stood: “The problem with Chequers is that it’s not so much a U-Turn as a hand brake turn.”

Brexiteer Cabinet minister Michael Gove admitted the Chequers’ plan was not everything he had hoped for, but he was a “realist” and the Prime Minister’s lack of a Commons majority meant the “Parliamentary arithmetic” was a factor in deciding what could be adopted.