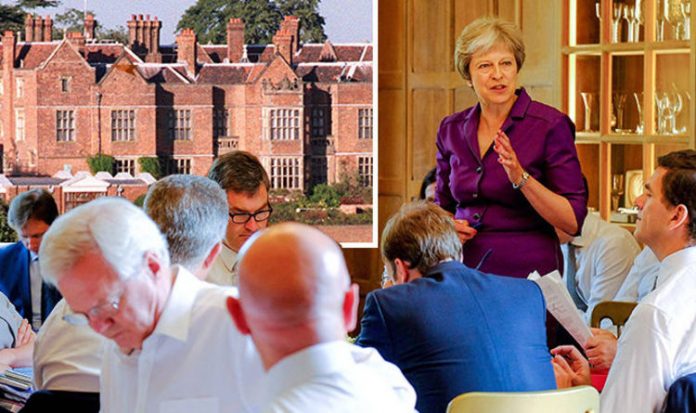 The Brexit Secretary, the first high-profile casualty of the divorce negotiations, has joined a number of backbencher Leave-backers in public criticism of the plan, which has been described as a blueprint for a soft exit by many.

Despite securing collective support from her Cabinet, Mrs May will now face political turbulence as her plan is drawn up into the highly-anticipated Brexit white paper.

Express.co.uk has broken down and evaluated the 12-point strategy agreed at Chequers for the UK’s future relationship with the EU, after it was crammed into a three-page document by Downing Street.

The Prime Minister’s first promise was to stick to the Article 50 schedule and ensure Britain leaves the European Union on March 29, 2019.

This is, of course, going to be followed by the so-called implantation period, which was agreed in the draft withdrawal agreement, before the future relationship really kicks in 2021.

While little details of ending freedom of movement with the EU, Mrs May has pledged to close the open-door enabling citizens of member states to freely work and live in the UK.

However, the Prime Minister has completely ruled out a continuation of migration from members of the Brussels-based project. She has included a “mobility framework so that UK and EU citizens can continue to travel to each other’s territories, and apply for study and work” – this could also be offered to other close trading partners in the future.

Contributions to the EU’s financial coffers will end with the UK’s membership, but that doesn’t mean Britain will not be sending any money to Brussels after Brexit.

While wanting to honour the campaign promise of ‘£350 million a week for the NHS’, Mrs May’s plan commits to “appropriate contributions” to EU projects in fields such as science and innovation.

While not wanting to be in the or a customs union with the EU, Mrs May has decided upon a “Facilitated customs Arrangement” to remove the need for customs checks and controls between the UK and EU.

Hoping to solve the Irish border conundrum, imported goods would be charged a UK-set tariff unless they are then travelling to an EU member. If this is the case, an EU tariff would be charged and the finances sent to Brussels.

New technology will aid the system by tracking the onward movement of goods and determine whether they are subject to a tariff.

Critics such as Labour’s shadow Brexit secretary or former Lib Dem MP Nick Clegg have said the new arrangement would be unworkable and leave the UK tangled in a web of bureaucracy.

Mrs May has pledged to maintain a “common rulebook” for food, farm, and industrial goods, which would mean the UK would align with EU regulation as well as commit to an “ongoing harmonisation” of the bloc’s rules.

While the Prime Minister says this will hand back control of regulations to Parliament, with MPs given the final say on changing rules, many fear it will hamper Britain’s ability to strike trade deals.

A full US trade deal was called into question because of the “common rulebook” because the UK would not be able to accept a number of Washington’s standards, for example on chlorine-washed chicken, which the EU has ban.

MPs will be given “oversight” of the adoption of any EU rules and regulations into British law. While designed to satisfy the campaign pledge to “take back control”, some are far from pleased.

The resigning David Davis believed this would still leave Britain as a “rule-taker” rather than a “rule-maker”.

He said: “One of the central issues which is problematic in this is this idea of a common rulebook.

“That means the European Union writes the rule for us in effect and we have to harmonise, we have the same rules for intents and purposes.”

Britain will not follow the EU’s regulations for services, with Mrs May expressing the need for “regulatory flexibility” in her plan.

The Prime Minister acknowledges the UK and EU will no longer have the same level of access to each others’ services markets going forward.

The City of London have come onboard with the plan, which is designed to enable Britain to strike lucrative deals around the world.

As Britain leaves the EU’s single market and customs union, the Government will be able to strike its own independent trade deals around the world, and have its own seat at the World Trade Organisation.

While pleasing free-trading Brexiteers, such as International Trade Secretary Liam Fox, the UK’s ability to strike trade deals will be hindered by the commitment to the EU’s common rule book.

UK courts will become the supreme overseer of British law in order to satisfy the Prime Minister’s red line to end influence of the ECJ in Britain.

However, UK-EU disputes will be handled by a “joint committee” and British judges would pay “due regard to ECJ rulings.

The Government will now be able to control access to its own fishing waters and ensure a greater catch for British vessels.

However, some campaigners believe the UK could still offer considerable access to foreign trawlermen.

Despite Mrs May insisting “no deal is better than a bad deal” the Government has not done adequate preparations for such an event, according to sources.

The Prime Minister has promised to step up preparations for no deal, to keep in line with the European Commission’s own work.

The document insists no deal is a possibility, ensuring Britain still has the scenario as a negotiating point.