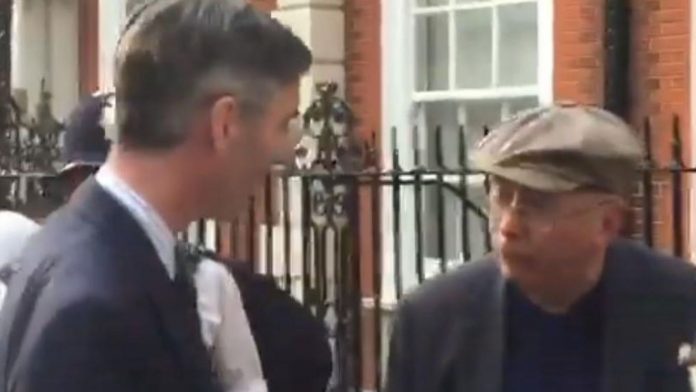 The children of senior Conservative Jacob Rees-Mogg have been told “lots of people hate” their father in a “sick” protest roundly condemned by MPs.

Activists stationed themselves outside the Westminster home of the prominent Brexiteer on Tuesday.

Footage of the demonstration, posted to the Facebook page of a group called “Class War”, showed veteran protester Ian Bone haranguing Mr Rees-Mogg over his employment of a nanny.

During the exchange, Mr Bone – who describes himself as a “very old anarchist” – addressed Mr Rees-Mogg’s children.

“Your daddy is a totally horrible person,” he told them. “Lots of people don’t like your daddy, you know that?

“He’s probably not told you that. Lots of people hate him.”

Leave the kids out of it. Don’t care what your views on Jacob Rees-Mogg, it is disgraceful to target his family, and shameful when politics becomes personal abuse. Children & family are never fair game

He accused her of having “Stockholm syndrome”, while Ms Crook told the activist she was “very happy”.

The protest has been widely criticised by MPs from rival parties.

Former Labour cabinet minister Yvette Cooper posted on Twitter: “Leave the kids out of it.

“Don’t care what your views on Jacob Rees-Mogg, it is disgraceful to target his family, and shameful when politics becomes personal abuse.

Fellow Labour MP Stella Creasy described the incident as “sick” and “beyond the pale”, while Liberal Democrat deputy leader Jo Swinson asked: “What is wrong with people?

“It’s not hard to disagree with someone without dragging their children into it. Horrible, heartless stuff.”

Anna Soubry attacked the “disgraceful behaviour”, suggesting it is “more evidence of how low our politics have sunk”.

Sarah Wollaston called on the activists to “unequivocally apologise” for the “absolutely disgusting” incident.

Meanwhile, ex-Tory MP Ben Gummer, the son of former Conservative cabinet minister John Gummer, said: “I am the child of a politician who had a big media profile.

“I had my share of this stuff. All I can say is that seeing it done to Jacob Rees-Mogg’s children still brings an oh-so-angry lump to my throat.

“It is a cruel thing to do to a child, and it will mark them forever.”

However, a post on the Facebook page of Class War on Wednesday read: “Right you lot out there who are all getting yer knickers in a twist over the Rees Mogg visit: He wheeled his children, Stepford Wife and Nanny out AFTER we arrived.

“He was the one who brought them all out. Desperate attempt by him to use his kids in a fairly sick way. Tell us who’s the bully there then…”