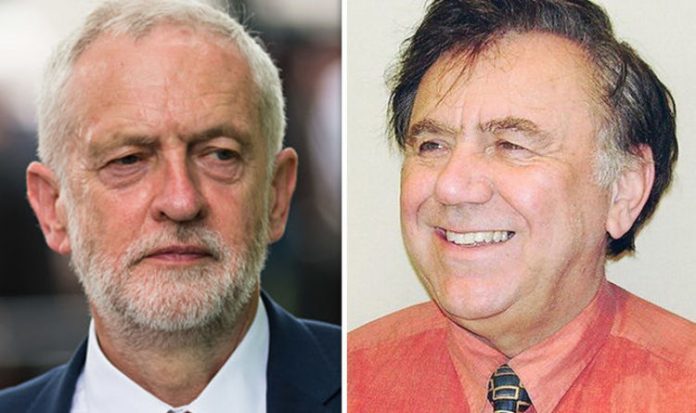 Peter Willsman is one of the so-called “JC9” of key Corbyn supporters on the party’s National Executive Committee (NEC).

He said he would “not be lectured” by Jewish supporters of the US President.

Mr Willsman also seemed to suggest examples of anti-Semitism within Labour were “falsified on social media”.

He said: “Some of these people in the Jewish community support Trump – they are Trump fanatics and all the rest of it.

“So I am not going to be lectured to by Trump fanatics making up duff information without any evidence at all.”

The audio recording was published by the Jewish Chronicle who describe the outburst as a “rant”.

People in the audio can be heard asking Mr Willsman to stop talking, but he carried on.

He said, in a louder voice: “I think we should ask the Rabbis where is your evidence of severe and widespread anti-Semitism in this party?”

The Corbyn ally then demands those at the NEC meeting raise their hands if they have “seen” anti-Semitism in Labour and then suggested he was “amazed” that some of them had.

He received several complaints about his comments.

But he apologised for his remarks and escaped formal punishment.

He also suggested some of his remarks had been misquoted.

The comments were made at an NEC meeting in which Labour refused to adopt in full the International Holocaust Remembrance Alliance’s definition of anti-Semitism.

Jewish Labour MP Luciana Berger has called for his suspension from the party.

She said: “Anyone listening to this recording will be appalled to hear the venom and fury directed by Mr Willsman at the British Jewish community.

“That he accuses the Jewish community of falsifying social media and being ‘Trump fanatics’ in order to deny the serious concerns of 68 Rabbis beggars belief.

“Mr Willsman only has to take a look at his NEC papers or the many recent press reports to see evidence of anti-Semitism in the Labour Party.

“In the past week alone two Labour councillors have been suspended and the party have confirmed that 252 people are being investigated for the comments they’ve made online directed at Dame Margaret Hodge MP.

“Now an accurate record of this diatribe has been identified the party should urgently conduct a formal investigation of this conduct and suspend him today.”

Mr Willsman is secretary of the Campaign For Labour Democracy.

It is the group which supported Ken Livingstone over his Zionism and Nazi remarks.

Mr Willsman is standing as a candidate for the current NEC elections.

Labour activists have been encouraged by the left-wing campaign group momentum to vote for all nine members of the “JC9”, which includes the organisation’s founder Jon Lansman, in the elections.