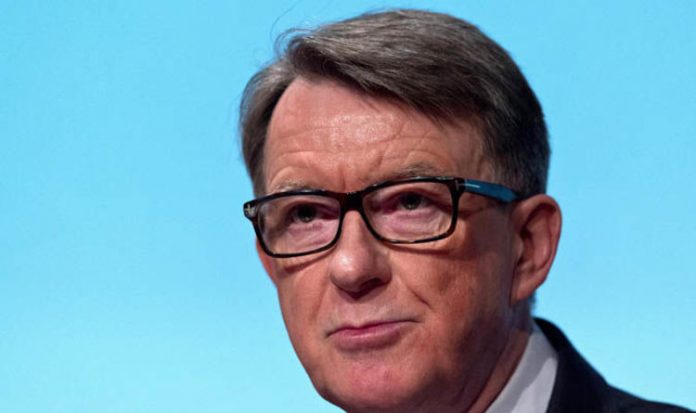 In a snub to the 17.4 million who voted Leave, the Labour peer sneered they were nationalists, not patriots like him who want the best for Britain. Tory MP Jacob Rees-Mogg hit back, citing the arch-Europhile peer’s reputation as the master of political spin, saying: “The dismissiveness of Brexiteers by the metropolitan elite is condescending and inaccurate.

“Lord Mandelson epitomises this, and when in office his approach to managing public opinion led to a corrosive distrust between elector and elected, and his failure to realise this shows a remarkable lack of self-knowledge.”

Fellow Brexit backer Priti Patel, the former international development secretary, said: “It is shameful to suggest that the 17.4 million people who voted to re-establish the UK as a global trading nation which is open to the world hate other countries or nationalities.

“Lord Mandelson should respect democracy and the vote of the British public rather than exercising his poor judgment perpetuating divisive and hateful remarks, just because he lost the referendum.”

The peer, a former Cabinet minister who was a key player in ex-premier Tony Blair’s New Labour project, declined to say who he was attacking. But he did not dispute a suggestion they included Mr Rees-Mogg who heads the influential European Research Group of Tory backbenchers, and International Trade Secretary Liam Fox. His remarks in general were seen by many to refer to those leading the campaign for a clean-break Brexit. Lord Mandelson, a former Labour MP and one-time EU trade commissioner, is backing demands for a second referendum.

He said controversy over Theresa May’s latest Brexit proposals proved the need for people to get a vote on any deal she makes. He told LBC Radio that the “ideology” of people he calls Brextremists was “nationalism, which is not to be confused with patriotism.

“They’re nationalists and should not be confused with patriots. I feel I am patriotic. I want the best for Britain. It’s why incidentally I voted Remain in the referendum although I entirely respect the contrary view of very many others. But these people, these Brextremists, they’re not like that. They are nationalists in the sense that they hate other countries, and they hate foreigners.

“And that is, in my view, what motivates them and drives their behaviour.”

Mr Baker added: “There is nothing illiberal about wanting democracy to have meaning. Quite the reverse.”

“He should take his hefty EU pension – which hard-pressed British taxpayers are guaranteeing and will be paying post-Brexit – and go and live in Brussels where he will clearly feel more at home. He and his distasteful views will not be missed.”

Earlier Lord Mandelson, who is a director of the Open Britain group behind the People’s Vote campaign for another plebiscite, told Sky News a referendum on the final Brexit deal was Theresa May’s “only way forward”.

But Mrs May’s official spokesman insisted there would be no second ballot.