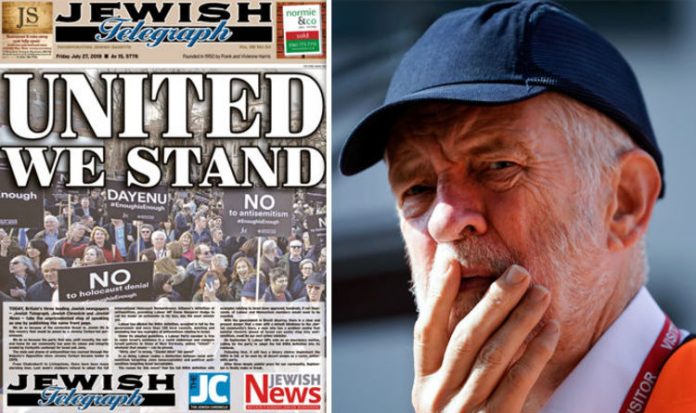 The Jewish Chronicle, Jewish News and Jewish Telegraph have all hit out at Labour’s anti-Semitism code.

They say Labour must sign up to the International Holocaust Remembrance Alliance’s (IHRA) definition of anti-Semitism.

All headlines say, “United we stand”, the newspapers said Labour had “diluted” the IHRA definition in its new code and there was “stubborn refusal” for the party to accept it.

The papers say: “The stain and shame of anti-Semitism has coursed through Her Majesty’s Opposition since Jeremy Corbyn became leader in 2015.”

They said Labour had the choice of accepting the definition or “be seen by all decent people as a racist, anti-Semitic party”.

But Labour says its version “expands on and contextualises” the IHRA definition.

Their code was approved by its National Executive Committee last week.

But it has been criticised by Jewish leaders and some of its own MPs.

It includes a definition of anti-Semitism given by the IHRA but it has not included all of the “working examples”.

She swore at him and called him an anti-Semite.

Dame Margaret “blew her top” when she found out what Labour had written its anti-Semitism guidelines in such a way, according to BBC political editor Laura Kuenssberg.

The Labour veteran said: “And I thought rather than do what politicians usually do, and talk each other down behind our backs, I would go and confront him.”

The party has launched a disciplinary inquiry into Ms Hodge.

Shadow secretary Nia Griffith called it ”completely absurd”, saying: “The idea that Jeremy would want to set up an atmosphere in the party where people couldn’t go and say things to him is completely absurd.

“It’s just not his way of dealing with things.

“I think we’d all prefer to have somebody speak to your face rather than behind your back.”

Speaking to BBC’s Today Programme, he said: “I can understand why she was so angry, if that’s what she believed this code had done, and I think it is a complete misunderstanding and we can resolve that amicably.”

Asked about Mr McDonnell’s comments, Mr Corbyn said: “I hope Dame Margaret has now had a chance to read the code of conduct that we agreed at the national executive, and I hope she has had time to reflect that this is a very honest endeavour to ensure we prevent any anti-Semitism rising in our party.”

Labour MPs will vote in September on whether to adopt the full IHRA wording after passing an emergency motion at a meeting on Monday night.