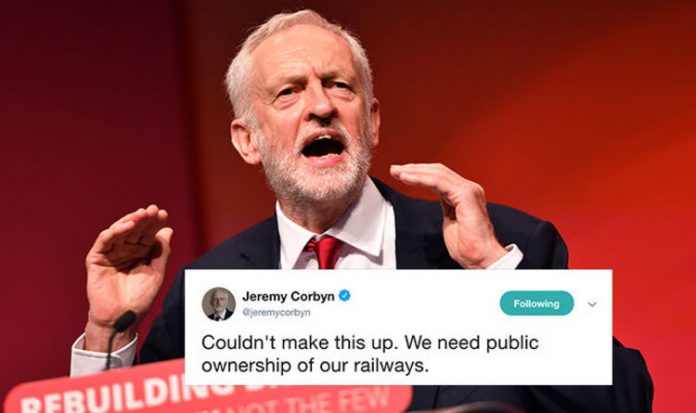 The Labour leader said train delays on one of Britain’s busiest train lines yesterday proved the case for renationalisation.

Virgin Trains from Liverpool to London Euston ground to a halt for more than an hour as delegates left the party’s annual conference.

Members of Mr Corbyn’s shadow cabinet were among those struggling to get home following the signalling failure.

Trains serving other destinations such as Birmingham, Manchester, Glasgow and Edinburgh were also affected.

The left-wing party leader tweeted: “Couldn’t make this up. We need public ownership of our railways.”

But his call attracted ridicule when social media users pointed out signals are managed by publicly-owned National Rail.

One Twitter user wrote: “You do realise that the signalling already is nationalised?”

Another said: “There already is public ownership of the signals, which is where the problem lies. Don’t let pesky facts get in the way.”

A Tory source added: “Jeremy Corbyn’s lack of understanding of how the railways operate shows he can never be let near the controls.”

In his speech to the party conference, Mr Corbyn spoke about the collapse of the Virgin Trains East Coast franchise.

The Islington North MP told delegates in Liverpool: “Every month this Government remains in power, the worse things get.

“Evidence of the failure of privatisation and outsourcing is piling up day after day. What has long been a scam is now a crisis.

“On the railways, the East Coast franchise has collapsed for the third time in a decade, bailed out by taxpayers yet again.

“You get on a train at Kings Cross and you never know who will be running it by the time you get to Edinburgh.

“Andy McDonald, our shadow transport secretary, will end this shambles.”

The Government has repeatedly defended the rail franchising system despite Mr Corbyn’s growing calls to bring trains back under state control.