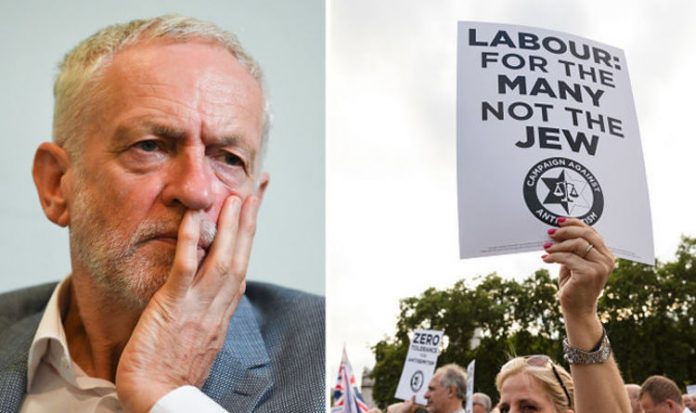 The Campaign Against Antisemitism started the petition at the beginning of the week amid growing anger at Mr Corbyn’s response to anti-Semitism claims rocking his party.

The Change.org petition said: “Jeremy Corbyn is an antisemite and must go.”

The group has published a picture of the Labour leader with the slogan: “For the many, not the Jew.”

They said: “For as long as the Labour Party is in Jeremy Corbyn’s grip, it cannot be a force for good.

“His past demonstrates that he should never have bene elected to the leadership of the Labour Party and is unfit to hold any public office.”

The group has claimed the Labour leader’s actions have “promoted antisemites”.

The petition said: “We had hoped that the Labour Party might at some point rise to the defence of British Jews by removing Jeremy Corbyn or by demanding his resignation, but the institutions of the once proudly anti-racist Labour Party are now corrupted and will not act.

“Instead they merely persecute those members who stand up to anti-Semitism.”

Mr Corbyn has denied the accusations and has insisted that the Labour Party is working to root out anti-Semitism.

The row deepened last week when a video emerged of Mr Corbyn claiming British Zionists of having “no sense of irony” despite having “lived in Britain all of their lives.”

Ms Berger, MP for Liverpool Wavertree, said she felt “unwelcome” in her own party because of the remark.

In the clip, taken in 2013, the Labour leader said: “[British Zionists] clearly have two problems. One is they don’t want to study history, and secondly, having lived in this country for a very long time, probably all their lives, they don’t understand English irony either.”

He added: “They needed two lessons, which we could perhaps help them with.”

He was forced to apologise when, in 2010, he hosted an event where a Holocaust survivor compared Israel to Nazism.

He said he had “on occasion appeared on platforms with people whose views I completely reject” and was sorry for the “concerns and anxiety that this has caused”.

Pictures emerged earlier this month showing the Labour leader attending a cemetery in Tunisia in 2014, holding a wreath near the graves of two men suspected of being connected to the 1972 Munich terror attack, where 11 members of the Israeli Olympic team were taken hostage and killed.