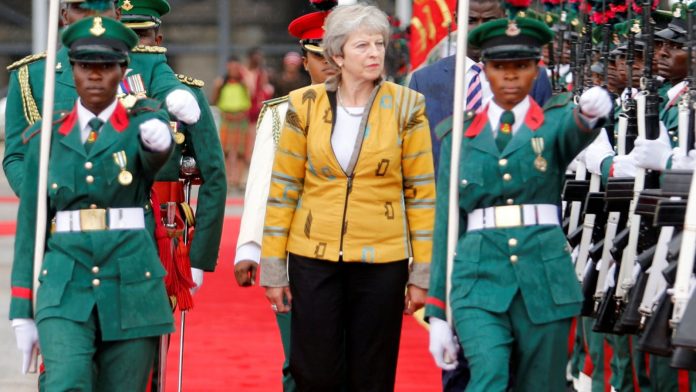 Theresa May has said the UK is “determined” to help Nigeria combat the threat posed by Boko Haram militants.

The prime minister has signed the first-ever security and defence partnership between the two countries, with the intention of stopping the “regional menace from spreading and posing a direct threat to the UK”, Downing Street said.

Mrs May touched down in the Nigerian capital Abuja on the second stop of her Africa tour on Wednesday, with trade and the fight against people-trafficking also on the agenda.

The partnership was announced following talks between the PM and Nigerian President Muhammadu Buhari.

The PM said: “Insecurity, violence and extremism destabilise countries and regions and undermine growth – holding back entire generations from reaching their potential.

“It is only when people are safe and communities stable that nations have the opportunity to thrive.

“We are determined to work side by side with Nigeria to help them fight terrorism, reduce conflict, and lay the foundations for the future stability and prosperity that will benefit us all.”

Boko Haram fighters have killed more than 20,000 people and forced around two million people to flee since their insurgency began almost a decade ago.

The UK will expand the provision of training and equipment for the Nigerian military, so the troops can protect themselves from the threat of improvised explosive devices.

For the first time, Britain has offered to train full army units before they are deployed to the north east of the country.

It is hoped this will give Nigerian forces the expertise to take the fight to Boko Haram.

The two countries have also pledged to:

:: Educate 100,000 children living in the conflict zone whose teachers have fled and schools been destroyed, by providing equipment, teacher training, and safe places to learn as part of a £13m programme;
:: Set up a new crisis response mechanism, similar to the UK’s COBRA system, to help Nigeria’s government better respond to incidents like terror attacks; and
:: Reduce the flow of recruits to Boko Haram by fighting the lies and false information spread by the group to attract new members.

The agreement also aims to strengthen policing, combat piracy in the Gulf of Guinea, tackle kidnapping and trafficking and root out corruption.

Mrs May said before the bilateral talks commenced that the UK and Nigeria have “very good co-operation” on a number of issues, such as defence, security and trade.

She added: “When we leave the European Union there will be more opportunities for us to increase those commercial links and trading opportunities.”

Next up for Mrs May is a visit to Lagos, where she will announce business projects, seek to develop financial links and meet survivors of modern slavery.

Among the pledges expected to be made are a promise of UK and French support to help Nigeria and Niger develop their borders to combat trafficking, as well as counselling and training to help 1,700 migrants and victims of modern slavery.

The PM will also launch “Legal Services are Great” a 12-month project which will see the UK develop Nigeria’s legal industry.

In addition, Britain will be involved in schemes in South Africa, Kenya and Nigeria to support businesses across the continent connect, grow and trade.

Ahead of her trip to Nigeria, Mrs May described modern slavery as “one of the greatest human rights abuses of our time” and said the UK was a “world leader” in trying to eradicate it.

She added: “A strong coordinated response is needed, but on her watch the Tory government has cut budgets, Border Force staff and axed 21,000 police officers.

“They are the front line in the fight against modern slavery.”

Mrs May’s stop in Nigeria comes after she made her pitch for the UK to help development on the continent and take on a greater share in the market amid competition from the US, China and France.

In a speech in Cape Town, Mrs May outlined her ambitions for the continent, declaring her desire for the UK to become the G7’s leading investor there by 2022.

She pledged to invest an extra £4bn in African economies, in the hope this will pave the way for “another £4bn in private sector finance” as a result of renewed business confidence in the continent.