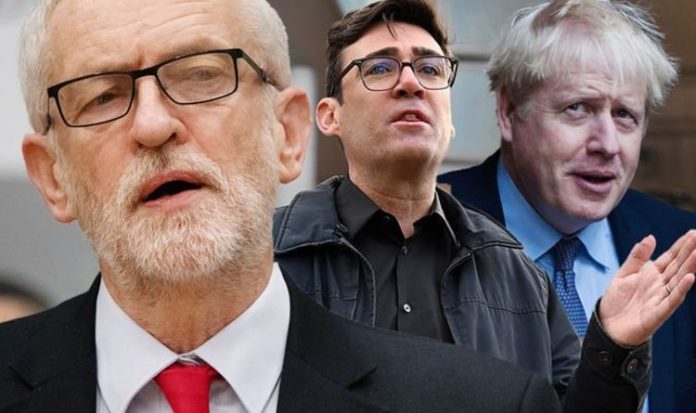 Mr Johnson’s bid to put the region in Tier 3 sparked a fierce political row with local leaders led by Greater Manchester Mayor Andy Burnham refusing to accept the tighter lockdown measures until their financial demands were met. But Tier 3 restrictions were eventually imposed on the region yesterday when talks broke down without agreement and the Government announced it would provide £22million for lockdown enforcement.

Mr Johnson then said he planned to bypass Mr Burnham and offer the £60million agreed by the Government to the 10 local authorities which make up the region.

A furious Mr Corbyn took to to social media to condemn the Prime Minister but received a brutal backlash from members of the public.

The former Labour leader tweeted: “The Government have failed the people of Greater Manchester.

“Andy Burnham needs our full support in campaigning for a support package that protects people’s health, jobs and livelihoods.”

Kevin Hoskin was among the first to hit back, tweeting: “Coming from the champagne socialist.”

Another Twitter user told Mr Corbyn: “You should know all about failing the people.”

And Ian Calender said: “You would be proud of him, he is from the same mould as yourself. A professional agitator.”

Len Collins said: “Greater Manchester has been failed by the ignorance of Andy Burnham. No more, no less!”

Richard Faughey tweeted: “Other areas negotiated quietly and came to agreement for the good of their people Mr Burnham was loud political and achieved nothing for his people.”

And another social media user said: “He was offered £60 million, he refused it.

“By the way, it is the people of Manchester who have increased the infection rate. Just the same as elsewhere.

“We all need to take responsibility for our own failings.”

There are no signs of a truce in the bitter row over the allocation of coronavirus cash to areas placed in Tier 3.

Speaking in the Commons today at Prime Minister’s Questions, Mr Johnson said: “Yesterday the Mayor of Greater Manchester was offered a further £60 million which he turned down.

“So I can tell the House today that that cash will be distributed to the boroughs of Greater Manchester.”

He continued: “I’ve been in politics a long time and I’ve probably seen more than anybody how the north gets pushed around by Westminster.

“I’ve seen it, I’ve lived through it, but on this occasion it was a step too far.

“If you’re’ going to lock down people’s lives, it can’t be on someone else’s terms down there, it has to be right for people here on our terms, if we’re to agree to that happening.”