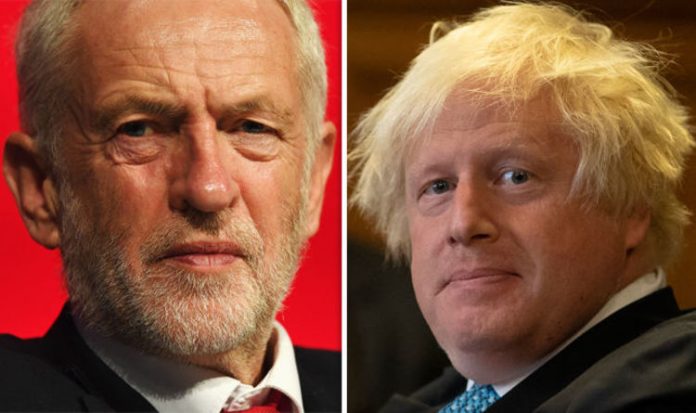 Boris Johnson has lashed out at the Labour leader in a newspaper column (Image: GETTY)

The former Foreign Secretary, who quit the Cabinet following Theresa May’s controversial Chequers plans, was writing in a newspaper column when he made the remarks.

Mr Johnson argued the UK would be “condemned to a crazed Corbynista takeover” if it did not “ditch Chequers” – stating Mr Corbyn “never misses an opportunity to miss an opportunity” and condemn evil.

Writing in the Sunday Telegraph, Mr Johnson said: “I feel like shouting as I watch Jeremy Corbyn. Just state the bleeding obvious – and denounce evil.

The now-backbench MP railed against the Labour leader’s apparent inertia regarding the Salisbury nerve agent suspects, arguing Mr Corbyn had refused to denounce Moscow because of his deep-seated opposition to the West.

When Theresa May announced in Parliament earlier this month that Wiltshire Police had identified the suspects on CCTV, the Labour leader refused to blame Russia outright for the attacks.

At the time Mr Corbyn said that “evidence points strongly” to the Kremlin while Theresa May went on to categorically assert the attack was a state-ordered hit.

Mr Johnson said: “As the PM made her statement, Corbyn had his chance.

“He could have shown that he was willing to stick up for Britain, and to point the finger at the aggressor.

“He could have condemned the Russian state – completely and unequivocally – and yet he just wouldn’t do it.”

Mr Johnson argued it no longer mattered to the Labour leader that Russia was no longer socialist or that “today Russia is a giant kleptocracy run by Putin’s cronies, in which journalists are regularly killed”.

He said: “Corbyn, deep down, is opposed to the West, and inclined to believe that in any great controversy it is the West, and especially the USA, that is in the wrong.”

Mr Corbyn has always been a staunch critic of the Iraq war and prominent member of the Stop the War Coalition.

The Labour leader faced outrage last month when he praised the release of Hamas terrorists and referred to them as his “brothers” on Iran’s state TV.

During the programme’s headline interview, Mr Marr quizzed Mr Corbyn on his response to the removal of a Hackney mural which appeared to depict anti-Semitic imagery.

Of the BBC interview, Mr Johnson thundered: “The entire TV audience looked at the screenshot of the mural – a blatantly anti-semitic image straight from the propaganda of 1920s Soviet Russia.

“We waited for Corbyn to state the obvious; we waited for him to confirm what we needed to hear – that in his view such imagery is unacceptable and anti-semitic.

Under Corbyn the Labour Party has faced accusations of anti-Semitism (Image: GETTY)

He added: “I am afraid we are coming up against the ugly reality of his world-view.”

Mr Corbyn’s Labour has been dogged with accusations of anti-Semitism this summer as the MP for Islington North has struggled to stamp out the problem.

Mr Johnson cited Mr Corbyn’s recent McTaggart lecture, in which the Labour leader argued for media reforms, as one the key reasons Mr Corbyn is “the biggest threat to freedom that this country has faced for decades”.

Mr Johnson said: “If anything he would like the British media to be more like mouthpieces of the Russian and Iranian regimes.

Mr Johnson also referred to the surge in Momentum “entry-ists” within Labour, stating the Party was on the cusp of political fallout.

He said: “You only have to look at the modern Labour party, now dominated by Momentum entry-ists, and you can see the potential for disaster.

“Across the country fine, moderate Labour MPs are facing deselection by claques of crazed Corbynistas.”