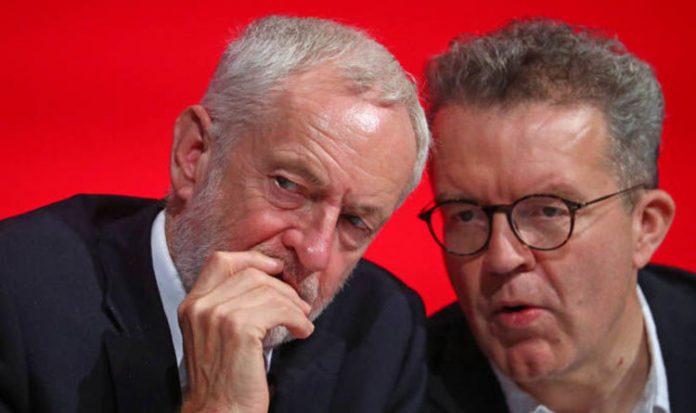 He said: “I’m bound by the democracy of our party. There will be a clear vote in the conference.”

The signal of his readiness to cave in and ditch his previous opposition to another EU poll provoked renewed infighting over Brexit among senior Labour and trade union figures at the conference yesterday.

And Brexit supporters last night rounded on the Labour leader for his threat to betray millions of voters.

John Longworth, chairman of the Leave Means Leave pressure group, said: “It would evidently be a massive betrayal of democracy for an honest result of a national referendum to be challenged.

“Every campaign during the referendum made plain that leaving meant leaving the single market and the currency union and regaining full control of our laws.

“Since that result those unhappy with Brexit have done all they can to spread baseless threats about our future and challenge every aspect of what should be a clean break.

“If Corbyn decides to push for a second ballot he would be disenfranchising the many millions who voted to leave by majority and millions of Labour voters.”

Conservative Party Chairman Brandon Lewis said: “The last pretence that Labour ever respected the democratic decision of the British people is rapidly disappearing.

“Jeremy Corbyn this morning proved he is not fit to govern our country. He confirmed Labour would take us back to square one on Brexit.”

Jeremy Corbyn before his appearance on the Andrew Marr Show (Image: GETTY)

As delegates gathered for the conference the row over Brexit was threatening to dominate the week ahead. The slogan: “Love Corbyn, Hate Brexit” was emblazoned across many T-shirts and banners at the gathering.

Delegates are set to vote on a motion tomorrow, backed by more than 100 local parties, calling for a second referendum at the conference.

Dozens of separate motions have been boiled down to a single “composite” motion.

Ahead of the vote thousands joined a protest march organised by the People’s Vote campaign group yesterday.

Mr Corbyn, who has previously resisted pressure from many of his MPs to campaign to halt the country’s exit from the EU, used a television interview to confirm he would abide by the vote.

He told the BBC One Andrew Marr Show: “I’m there elected as a leader of this party, elected as the leader in order to bring great democracy to this party and that’s exactly what I’ve been doing for the past three years.

“Let’s see what comes out of conference and then obviously I’m bound by the democracy of our party.”

He declined to say what the question in a second referendum would be, describing the matter as “conjecture”.

He spoke after a poll showed that 86 per cent of grassroots Labour members were in favour of a referendum on any final Brexit deal between the Government and Brussels.

He said: “There are significant numbers of traditional Labour supporters who are saying ‘we’re going to vote Conservative because we don’t trust Labour to take us out of the European Union’. “For us to now enter some kind of campaign that opens up that issue again I think would be wrong.”

Mr McCluskey said even if a second referendum was held, voters should not be given the option of choosing to stay in the EU.

“The referendum shouldn’t be on do we want to go back into the European Union,” he said, adding: “The people have already decided on that.”

Shadow business secretary Rebecca Long-Bailey agreed that a second referendum would be seen as a “betrayal” by many voters in traditional Labour areas.

She said voters in her Salford and Eccles constituency had been divided by the 2016 referendum, adding: “There were some firm Remainers and firm Leavers but a lot of people in between. “That’s what a second referendum causes concern for me because I think for people like that who really weren’t sure and still aren’t sure and just want to get the best deal and make sure our economy is set up on the right track, it would be concerning for them.”

But Labour deputy leader Tom Watson said the leadership should “respect” the outcome of the conference vote and indicated he was likely to back staying in the EU if a poll was held.

“But I would look at what the question is on offer and I would want to know what the deal is that comes out of the negotiations in Europe, if that happens.”

“We think that the terms of Brexit should be put to the British people,” he told BBC Radio 4’s The World This Weekend.

“People voted to leave the European Union but that doesn’t mean buying a pig in the poke or giving the Prime Minister a blank cheque.

“Whatever she negotiates she needs to bring back to the British people.”