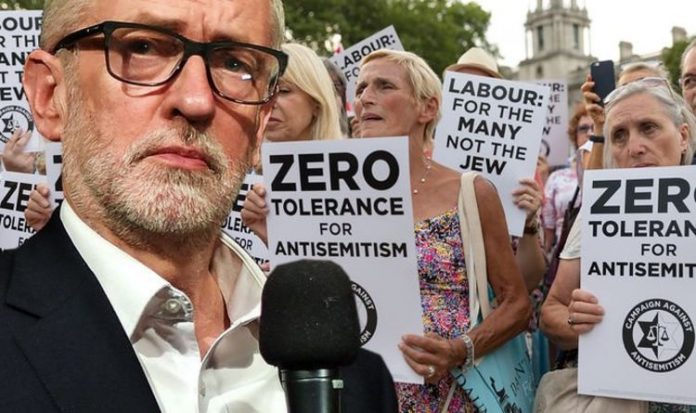 The Labour Party has been plunged into embarrassment beyond that which was experienced after the 2019 general election, as a civil war between the outfit’s Left and Centre-ground members teeters on the edge of realisation. It comes as the party’s former leader and veteran socialist politician, Mr Corbyn, was suspended from the party over his refusal to accept the findings at face-value of a report on antisemitism in the party. Launched last year amid rising discontent that his Labour had overlooked rampart internal racism, Mr Corbyn, in a statement, said the issue had been “dramatically overstated for political reasons”.

This was the decisive comment which led to the party’s new leader, Sir Keir Starmer, giving him the boot.

Many allies of Mr Corbyn and those on the Left have expressed exasperation over the decision.

They insist Mr Corbyn was not or is not an antisemite, pointing towards his decades of campaigning against racism.

Yet when interviewed by BBC Newsnight, Joan Ryan, former Labour MP and chair of Labour Friends of Israel, claimed that Mr Corbyn expressed a lack of knowing what to do with the situation.

Jeremy Corbyn: The ex-leader was accused of not knowing what to do when asked about antisemitism (Image: GETTY)

READ  Is there a Tier 6 - Could Boris install even harsher lockdown rules? | UK | News (Reports)

Labour Party: Corbyn was suspended from the party after he said the allegations had been overstated (Image: GETTY)

“I went up to him as chair of Labour Friends of Israel and said ‘Jeremy, what are you going to do about this? You didn’t say.’

“And his response was, ‘why are you asking me?’

JUST IN: Labour ashamed of our history and abhors its culture

Ms Ryan continued: “I think he’s so convinced of his own credentials as an anti-racist that he just can’t see that he could be engaged in something that was antisemitic.”

Many have cited Mr Corbyn’s alleged antisemitism as more a lack of management than conscious racism.

He has been called the “accidental leader” who pleaded with allies in 2015 that they “better make f***ing sure I don’t get elected”, as recounted in Owen Jones’ ‘This Land’.

The Equality and Human Rights Commission’s (EHRC) report on antisemitism under Mr Corbyn’s five years in charge of Labour also suggested a lack of leadership on his behalf.

Jewish Labour: Many Jewish people in the party were unhappy with the way Corbyn handled antisemitism (Image: GETTY)

Antisemitism: Other Jews still were supportive of Corbyn and saw him as anti-zionist (Image: GETTY)

It poked holes in his operation: it found that the Governance and Legal Unit (GLU) – which is the unit within Labour responsible for handling complaints – before September 2019 had no clear process whereby those accused of antisemitism in the party could be investigated.

And, further, before 2018, the party had no “consistent or reliable system for recording antisemitism complaints”.

After September 2019, investigations into reports of antisemitism were required to be signed off by at least two of four senior staff in the GLU.

However, it appears the damage had already been done to Mr Corbyn’s reputation.

UK election: Corbyn led Labour to its worst defeat since 1935 in the 2019 election (Image: Express Newspapers)

Fiona Sharpe, spokeswoman for Labour Against Antisemitism (LAAS), told The Guardian that the party’s processes had not been “fit for purpose”.

She said: “Over this period, LAAS reported hundreds of apparent party members, providing evidence of Holocaust denial, the use of racially pejorative language, threats of violence and a variety of antisemitic tropes.

“Due to Labour’s appalling mismanagement, many of these members are still active in the party: at local meetings, on councils and even in parliament.”

Meanwhile, despite his attempts to rectify the issue, Sir Keir has himself been accused of mismanagement.

He said “chaos” could now ensue, going as far as to say the debacle could cost Labour the 2024 election.

However, other union representatives have been less disastrous in their outlook.

Although he added that Sir Keir’s decision “reeks of political opportunism” – echoing that of Mr Corbyn’s concerns.