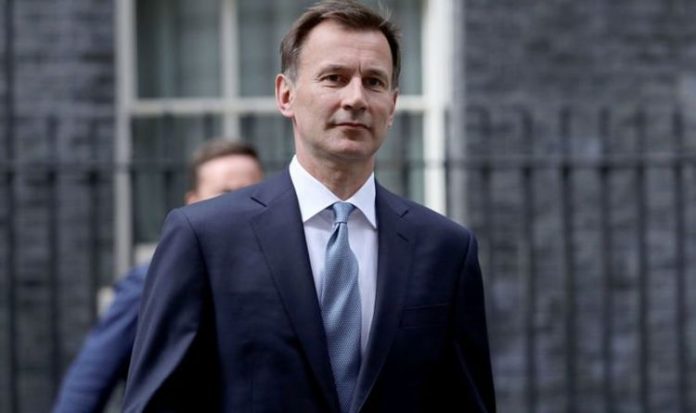 The pandemic – and the subsequent massive public support for the sector – has given Mr Johnson the perfect chance to set out why a new tax may be necessary to fund increasingly expensive care for an ageing population. Mr Hunt suggested that tackling the issue could provide the PM with a legacy similar to the establishment of the NHS in the aftermath of the Second World War.

Successive governments have failed to address a situation where families can face ruinously expensive care costs amid a system struggling for funds.

Mr Johnson used his first speech as Prime Minister in July 2019 to say “we will fix the crisis in social care once and for all with a clear plan we have prepared to give every older person the dignity and security they deserve”.

But little progress has been made and coronavirus has set back efforts to produce a new system.

The Commons Health and Social Care Committee, chaired by Mr Hunt, has called for £7billion extra funding a year by 2023-24 to cover an increasingly ageing population and the rise in the National Living Wage affecting costs.

The MPs also recommended a £46,000 cap on the total costs anyone should have to pay for their care, drawing on recommendations made by economist Sir Andrew Dilnot as long ago as 2011.

Mr Hunt said: “I think the biggest battle now is with the Treasury, because the sums of money are eye-watering.”

But, he added: “We were even more bankrupt as a country after the Second World War and then we had the imagination and vision to set up the NHS. I think this is another 1948 moment.”

Mr Hunt suggested a tax on the middle-aged might be required to fund the system, along the lines of Germany and Japan.

He said: “Both of them introduced a tax surcharge to people over 40, which is only a small amount extra, but as you get older you start to pay a little bit more. And neither have had public pushback for doing that.”

The alternative was the model in countries like Italy or Spain, where families looked after their elderly relatives, something which often resulted in women staying at home rather than pursuing a career.

“I suspect that’s a price we would not want to pay in this country,” Mr Hunt said.

The MP for South West Surrey, who ran against Mr Johnson for the Tory leadership and the keys to No 10, said the Prime Minister understood the need for action because “the way that we treat older people in this country has neither kindness nor decency at the moment”.

With the advantage of a healthy Commons majority and public support for action, Mr Hunt said Mr Johnson should adopt a bold approach.

“I just think the year after the pandemic?it really is now or never. Because the public have never understood better how important our care system is.”

He added: “I don’t think Boris needs me to tell him this, but boldness always pays off in politics.”

“I hope people will demand reform of social care coming out of this,” he said.

The call for action was echoed by those working in the adult social care sector.

Jane Townson, chief executive of the UK Homecare Association, said no tangible progress has been made since the Prime Minister’s pledge on the issue.

She called for the Government to set out a clear vision for the sector and an approach which ensures people’s needs are met and costs covered “with fairness and clarity regarding the responsibilities of state and citizen”.

A Department of Health and Social Care spokesman said: “We remain committed to sustainable improvement of the adult social care system and will bring forward proposals as soon as possible.”